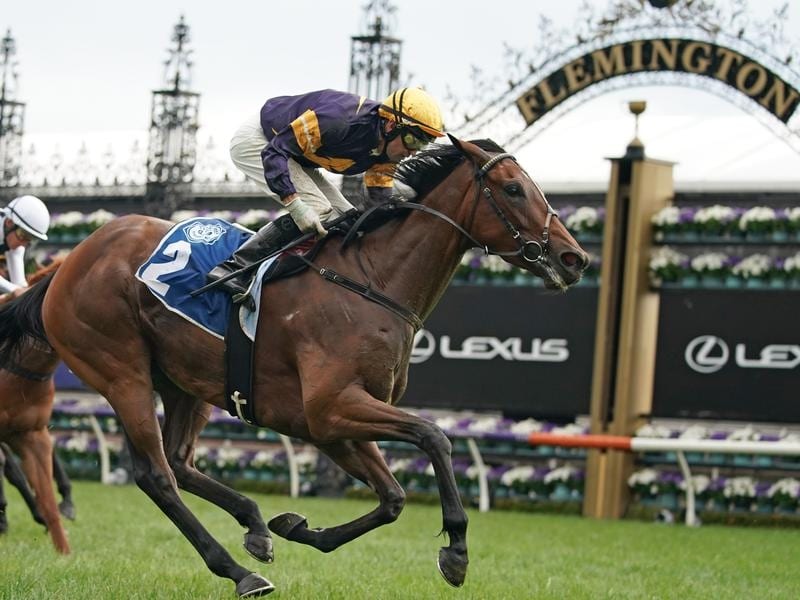 The Mike Moroney-trained Tofane gets another Group One chance in The Galaxy at Rosehill.

Trainer Mike Moroney reckons jockey Michael Dee will be out to make amends in the Group One Galaxy on Tofane after a luckless unplaced run in the Newmarket Handicap.

Tofane finished seventh in the recent Group One Newmarket (1200m) but Moroney believes the mare should have finished closer after striking traffic issues and being shuffled back before regrouping to finish the race off well.

“She’s coming off a pretty luckless run in the Newmarket. She should have run in the first four somewhere, I would think,” Moroney said.

“It was a bit of pilot error. We’ve given him another chance anyway but he was pretty apologetic.

“But not to worry. It’s just disappointing when it happens in the big races.”

A winner of four Group One races, including this season’s C F Orr Stakes on the Moroney-trained Alabama Express, Dee is a natural lightweight and Tofane has 51kg in Saturday’s 1100m handicap at Rosehill.

Moroney felt Dee should have gone to plan B in the Newmarket once Tofane jumped quickly.

“He was up outside the winner and decided to try to drop in and get cover and ride to instructions,” Moroney said.

“When she flew the gates you’ve just got to go to Plan B and he would have been better off just keeping her nicely together, sat in the clear and then gone with Bivouac when he quickened and she would have run in the money somewhere.”

Tofane has won four of her 11 starts including two at Group Three level against mares in spring and Moroney believes The Galaxy is not as strong as the opposition she faced in the Newmarket.

“She’s got Group One ability so hopefully we get it sooner rather than later,” Moroney said.

“If the track dries out it will probably be against her a little bit because 1100 metres is as short as she wants to go. That would be the little question mark.

“But if it is definitely rain-affected and it’s more like a 1200-metre race that will really suit her.”

Moroney says if Tofane wins The Galaxy she could stay in Sydney for the TJ Smith Stakes otherwise there are options to freshen her for two Group One sprints in Adelaide.

The mare has not raced in the clockwise direction but Moroney said she won a clockwise trial in New Zealand as a young horse and handled it well in a gallop at Flemington on Tuesday.