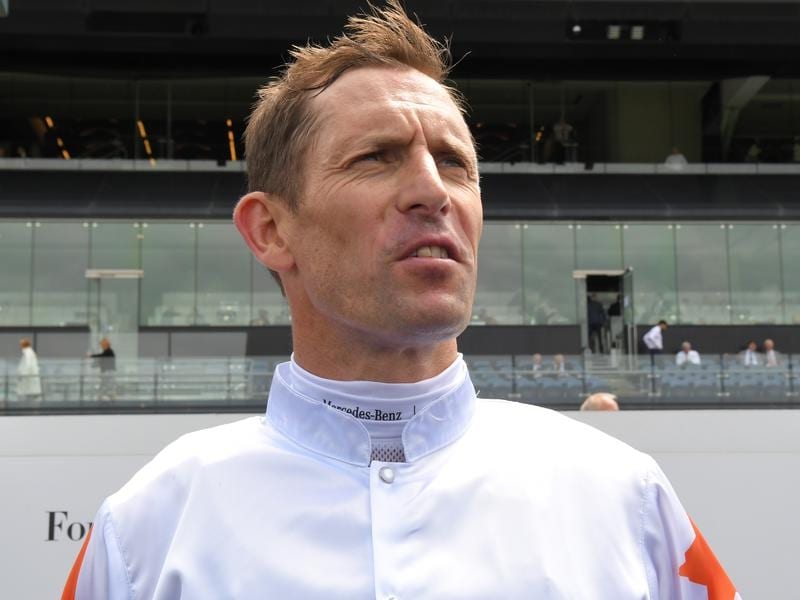 Hugh Bowman and fellow jockey Tommy Berry have taken a road trip to Melbourne to ride.

A 10-hour, one-way road trip with a rival jockey is not the Golden Slipper preparation either Hugh Bowman or Tommy Berry would choose.

But Bowman figures there are worse people to spend a long-haul journey with than the affable Berry.

“If you can’t get on with Tommy Berry then you’ve got personality issues,” Bowman said.

The high-profile hoops carpooled from Sydney to Melbourne on Thursday to ensure their compliance with biosecurity measures introduced by Racing Victoria in the wake of the corona virus outbreak.

Both had long-standing commitments in the Group One William Reid Stakes at The Valley on Friday night with Bowman aboard favourite Bivouac and Berry on Exceedance.

They will return to Sydney on a charter flight with several Victorian-based jockeys, including Craig Williams and Damien Oliver, to ride at Saturday’s Golden Slipper meeting at Rosehill.

Bowman says the mood among the jockeys remains positive and their focus is on keeping the racing industry buoyant.

“I think, more than anything, everybody wants to do everything they need to do as individuals to ensure the ball keeps rolling with the races,” Bowman said.

“Whatever needs to be done as far as biosecurity measures, I think everyone is in the same boat in terms of being prepared to do that.”

Trainers with runners at Rosehill are equally determined to keep the industry afloat for as long as possible.

Richard Litt, who has star colt Castelvecchio in Saturday’s Group One Rosehill Guineas, says the impact will be felt by many if racing does cease for any period of time, as it has in the UK.

“We have to think how lucky we are to be able to race. If we come to a stop it affects a lot of people so for us to be able to keep racing at the moment, it’s a privilege really and we should be very grateful,” Litt said.

“The expenses don’t go down in caring for horses.”

With both countries closing their borders and implementing 14-day quarantine periods for new arrivals, Richards has chosen to stay in his homeland and train his Sydney squad remotely.

His father, Paul, is leading the team caring for the hoses in Australia and Richards says it is not an entirely foreign scenario.

“We’ve been travelling horses for a little while now so you just have to trust your staff and trust your systems and that’s what we’re doing,” Richards said.

“Dad was a jockey and trained and came down and gave me a hand when I got the job at Te Akau so it’s all in good hands.”

The Golden Slipper will be run in front of empty grandstands with the public locked out in accordance with the government’s rules to limit outdoor gatherings to 500 people.

The Moonee Valley meeting will also be conducted without a crowd and with only essential industry employees permitted.