Improving staying mare Oceanex has gained a spot in this year’s Melbourne Cup with a tough win in the Listed $320,000 The Andrew Ramsden (2800m) at Flemington today. 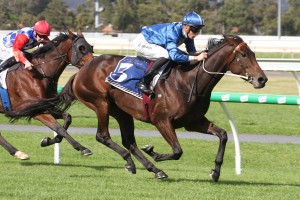 Oceanex, above, secured a spot in the 2020 Melbourne Cup with her win in The Andrew Ramsden at Flemington. Photo by Jenny Barnes.

Runner up King Of Leogrance was expected to take advantage of the exemption from the ballot for the Group 1 $8m Lexus Melbourne Cup (3200m) at Flemington on November 3 and was sent out as the $1.80 favourite.

But the Mick Price and Michael Kent (Jnr) trained mare Oceanex ($6.50) outstayed the odds on favourite to grab a spot in ‘The Race That Stops A Nation’ on the first Tuesday in November.

Oceanex is now a $34 chance at Ladbrokes.com.au for the 2020 Melbourne Cup.

“She is a new stayer,” Price said.

“Tom Marquand got off her in Sydney and said you want to try this over a mile and a half so her first 2500m in Adelaide was strong and today was fantastic.”

“I know she drew barrier one and got the gun ride with a good pair of hands from Zahra but still she beat the right horse in the race and she won convincingly going away.”

“She loves Flemington and there will be a bit of nerves now.”

Price will now give Oceanex a short ease up before preparing her for the Spring but is uncertain when she will return to the races.

“I have got no idea. I will have top think about it now. The pressure is on,” Price said.

“She is doing the job herself. She hasn’t had a grinding stayers prep or anything. The trip to Adelaide was nice but I think she has got a beautiful big clean set of lungs and she stays.”

Winning jockey Mark Zahra settled Oceanex third on the fence and put the mare to sleep while Damien Oliver had King Of Leogrance travelling smoothly in the second half of the field.

Oliver surged King Of Leogrance to the front at the 300m mark but Oceanex pushed up underneath him to record a three quarters of a length win over the favourite with Super Girl ($26) a quarter of a length away in third spot.