The 2020 edition of The Goodwood has gone the way of Godolphin following Trekking’s late run to upset the favourite by no more than a stride.

The five-year-old son of Street Cry was largely overlooked in the market racing at $10.00 odds but got the gun run of John Allen in the saddle to upstage a very brave Gytrash in a head bob right on the line.

In what many considered to be the deepest edition of the Group 1 feature to date, Trekking became the first horse to win in Godolphin blue after what had largely been a lackluster Adelaide Carnival for the stable.

Like many others, Trekking also had Group 1 success to his name having won last year’s Stradbroke Handicap at Eagle Farm. Many questioned his chances though having never run at Morphettville but failed to factor in the hot hand of Allen – who claimed his second Group 1 over the Carnival. 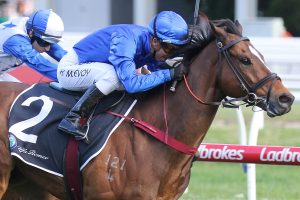 Trekking was crowned a two-time Group 1 winner after taking out Saturday’s The Goodwood at Morphettville. Photo: Ultimate Racing Photos.

“What a great little horse. I was surprised, it was my first time riding him, but when we got out to the mounting yard I realised how small he was,” Allen told racing.com.

“He was tough, we had a super run, the runner-up gave a really good kick. I thought when we got out we were going to chase him and he kept kicking, but to my lads credit, he really fought and put his head down at the line.”

The plan now for Trekking is to head back to Queensland to defend his Stradbroke crown. The now two-time Group 1 winner has firmed from $17 into $12 with Ladbrokes behind Vega One and Saturday’s Inglis Guineas winner, Dawn Passage.

Gytrash certainly wasn’t disgraced running second, but the same can’t be said for Santa Ana Lane, who got too far back in the field after acting up in the gates.

Sunlight’s tough campaign also continued with the star mare finishing towards the back, while Godolphin celebrated another minor victory in the form of Lyre, who backed up his runner-up in last fortnight’s Robert Sangster with another Group 1 placing.

As for Trekking, the talented speedster will now hope to follow in Santa Ana Lane’s footsteps by becoming the second horse to complete The Goodwood – Stradbroke Handicap double.