Consistent mare Irithea has been rewarded for her tidy form during the Autumn with a well-deserved win in the Group 3 $160,000 Emirates Park Dark Jewel Classic (1400m) at Rosehill today. 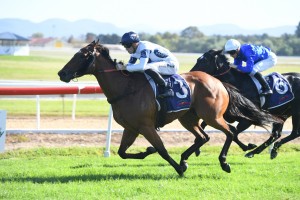 Irithea, above winning at Hawkesbury last year, was in the winner’s stall again at Rosehill after winning the Dark Jewel Classic. Photo by Steve Hart,.

The Dark Jewel Classic is one of the features of the annual two-day Scone Carnival which was run at two venues this year with the second day being transferred to Rosehill.

Winning trained Bjorn Baker had put the Dark Jewel Classsic on his wish list of wins and that came to fruition with a first class performance from one of his stable favourites in Irithea.

“I have always wanted to win the Emirates Park Dark Jewel and I just didn’t think it would be at Rosehill,” Baker said.

“Obviously it is the race of the (Scone) Carnival and very exciting. She has been a stable stalwart, Irithea, and she always puts her best effort in and Darby Racing have been so good to me and I am very grateful to them.”

“She is always thereabouts and does it the tough way too. She is great to have around the stable, she has a great attitude and they are good horses those Snitzels, that is for sure.”

Winning jockey James McDonald let Irithea ($7.50) slide across from the outside gate and sit outside of the leader Ready To Prophet ($61) in the early and middle stages of the race.

Irithea went to Ready To Prophet soon after straightening and fought hard to the line to record a one length win over the fast finishing Into The Abyss ($18) to give McDonald his third winner for the day.

Ready To Prophet stuck on bravely for third.

Baker said he wasn’t surprised to see Irithea sit outside of the leader and was happy with the way the race panned out.

“I thought it worked out really well actually,” Baker said.

“When she can take a sit and they roll along I think she is at her best, and it really worked out well today.”