Another dominant win by Wisdom Of Water in today’s Group 3 $125,000 Ken Russell Memorial Classic (1200m) at the Gold Coast has the brilliant colt primed to take his place in the Group 1 J J Atkins for the two -year-olds. 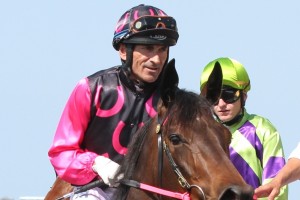 Jockey Robbie Fradd, above, steered Wisdom Of Water to an all the way win in the Ken Russell Memorial Classic at the Gold Coast. Photo by Daniel Costello.

Wisdom Of Water rocketed out of the barriers to claim the front from the outset and was never headed before going on to record a two and three quarter lengths win.

“He has had two solid gallops now and he goes into the Atkins. He will be cherry ripe,” Toby Edmonds said.

“I would like a lot more tempo so you can give him that cuddle so he can finish off.”

“We have a bit of work to do from here and there. We have three weeks to get him a little bit fitter.”

“We will take him up there (to Eagle Farm) for a gallop. He performed poorly on that track at his first run there so we have a bit of work to do but quite confident he is as good a chance as any.”

Edmonds would have liked to see Wisdom Of Water take a sit behind a pacemaker but that was never going to happen today but could be a possibility against a higher class of two year olds in the J J Atkins.

“It was a good (today). It would be better if there was a bit more tempo for him so he could just drop in behind them,” Edmonds said.

“There was a lack of tempo there and we were confident to bang him up on the speed and not get in behind horses that were going to pull up in his face.”

“We wanted to be positive and if something went around him and led, fine, but what happened today was good. ”

Wisdom Of Water was the only one the punters wanted and the colt was sent out as the $1.35 favourite for the Ken Russell Memorial Classic and didn’t let his backers down with an all the way win.

The judge couldn’t split the two Sunshine Coast trained youngsters Tick Tock Boom ($31) and Superare ($81) and posted a dead for second with the Kris Lees trained Always On Show ($41) back in fourth spot.

Wisdom Of Water is now the equal $4.80 favourite at Ladbrokes.com.au with the Tony Gollan trained Isotope for the J J Atkins.