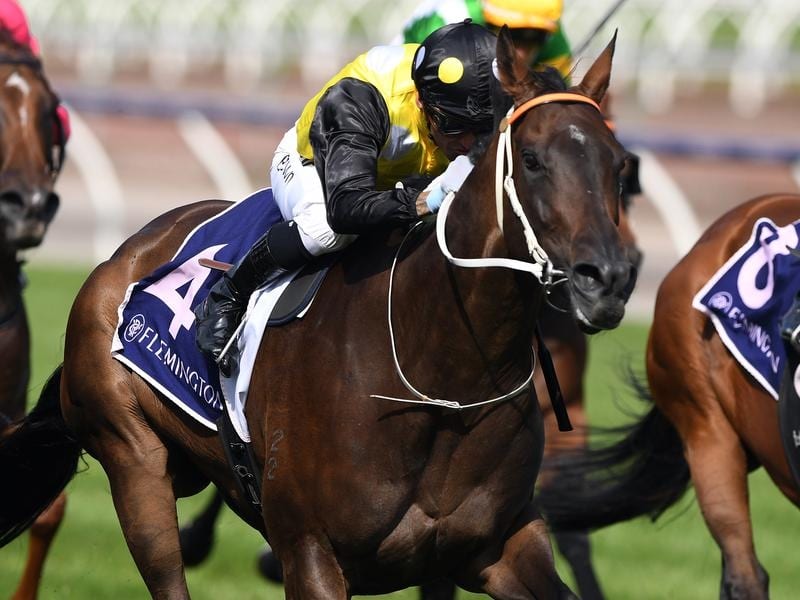 Dual Group One winner In Her Time will have her final start in the Gold Crown at Rosehill.

Trainer Kris Lees is looking to send dual Group One winning sprinter In Her Time out on a high at Rosehill.

The mare is listed for auction as a broodmare proposition at the Chairman’s sale early next month and will be backing up from her fifth in the Group Three Hall Mark Stakes at Randwick on Saturday.

The races are part of the Hawkesbury Cup program which has been transferred from the provincial track to Rosehill amid coronavirus protocols.

Jockeys in NSW have been divided into three regions which means Sydney’s metropolitan riders would not have been able to compete if the meeting was held at its normal provincial site.

Lees has indicated the Crown is his preference with Hugh Bowman to ride In Her Time who will carry 60kg in the Group Three event.

“Under the set weights and penalties conditions of the Crown, she is well treated,” Lees said.

“She didn’t have a gut-busting run last Saturday, and has pulled up well.

“Hopefully we can send her out a winner.”

In Her Time’s two Group One wins have been in the 2018 Galaxy when she was trained by Benjamin Smith and the 2019 Lightning Stakes in Lees’ care.

After striking trouble in the Hall Mark, In Her Time made up a lot of ground late.

She is the $4.50 favourite for the Crown ahead of Wednesday’s acceptances.

Lees will make a decision whether Asharani runs in the Crown after he sees the make-up of the field.

The trainer is also looking forward to the return of Graff who is among his entries for the Listed Gold Rush.

The four-year-old is another whose racetrack career is coming to an end with Aquis Farm joining Australian Bloodstock in a joint venture earlier this year to stand him at stud.

Graff has not raced since being unplaced in The Hunter in November but has since won the second of two barrier trials, beating Group One-winning stablemate Le Romain.

He won the Clarendon at the 2018 Hawkesbury meeting at his second start.