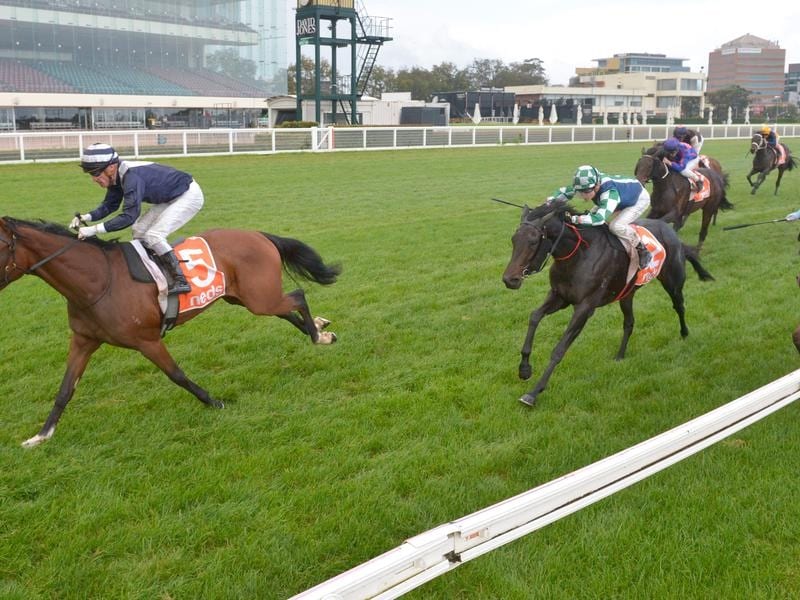 Bellx (r) will try to improve on her last-start second when she runs in the St Leger at Flemington.

Bellx is well down the ballot order for an interstate Group One event, leading Lindsay Park to switch its attention to a stakes race at home.

The filly features among nominations for the Australasian Oaks (2000m) at Morphettville on May 9 but instead will step out over a longer distance in Saturday’s Listed VRC St Leger (2800m) at Flemington.

There are no such concerns about Bellx gaining a St Leger start as the filly is No. 6 in the ballot order among the 19 entries.

While the Australasian Oaks may be beyond reach, Lindsay Park still harbours plans to head to Adelaide for a shot at the Group Three SA Fillies Classic (2500m) next month.

Bellx showed her staying credentials when she finished 1-1/4 lengths second to Royal Crown, also an entrant on Saturday, in the Listed Galilee Series Final (2400m) at Caulfield on April 11.

Tom Dabernig, who trains in partnership with David and Ben Hayes, says Bellx goes into Saturday’s race with a reasonable chance judging on her recent form.

“She seems to be going well and importantly she stays well,” Dabernig said.

The change in plans has also resulted in a change of jockey.

Jamie Kah, who rode the filly when she ran third in the Tasmanian Oaks (2100m) at Launceston in February, will be reunited with the filly.

Craig Williams has ridden Bellx at her past two starts.

“We said to Craig to take another ride because we were thinking of going to Adelaide,” Dabernig said.

“But now we’re thinking of staying here and Craig has another ride we’ve got Jamie back on and she knows her quite well.”

Lindsay Park last won the St Leger with Berlioz in 2009.

Dabernig said the step up to 2800m would not pose a problem for Bellx.

“She’s a promising stayer and just keeps on improving,” he said.

“I don’t think the distance will be a problem and she’s never run a bad race to be honest.”