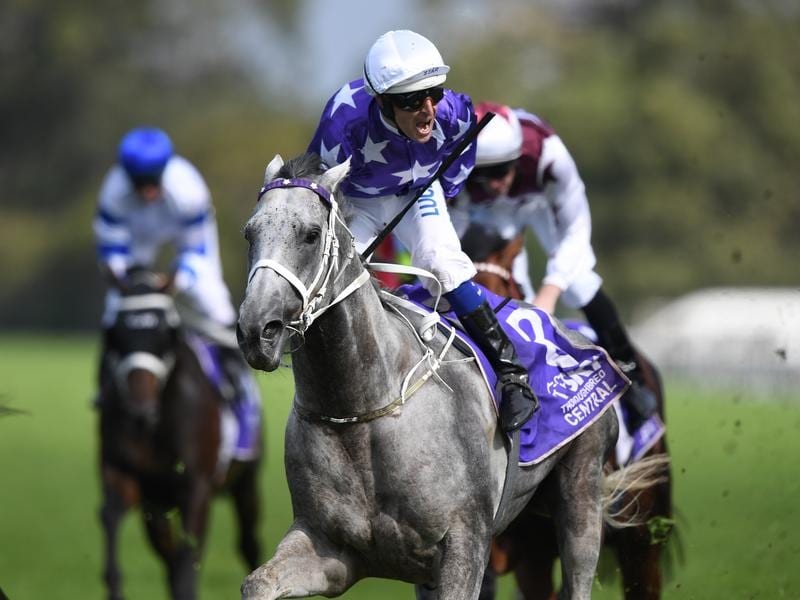 Group One Rosehill Guineas winner D’Argento is to be offered for stallion duties.

Group One winner D’Argento is to be retired to stud with trainer Chris Waller and Star Thoroughbreds abandoning a racetrack return.

The winner of the 2018 Rosehill Guineas, D’Argento has not raced for a year after a couple of minor problems interrupted his recent preparations.

Waller said the striking grey had been unlucky not to have a better Group One record.

“D’Argento came into the stable as a typical Denise Martin purchase, a smart looking type by quality stallion So You Think,” Waller said.

“The colt won his first start impressively as a two-year-old which ended up being a decent form race.”

D’Argento won his second start at two and was spelled, coming back to win his first start at three.

In February 2018, D’Argento ran third in the Group Two Hobartville behind future Group One winners Kementari and Pierata.

“In the Randwick Guineas I clearly recall from his outside barrier that he was greatly disadvantaged but then he easily won the Rosehill Guineas two weeks later,” Waller said.

He was then unlucky when fourth in the Doncaster Mile won by Happy Clapper.

In his next preparation, D’Argento was beaten by the barest of margins by Hartnell in the Epsom Handicap.

“When you consider he probably should have won a Doncaster and Epsom it certainly would have made him into a high-profile stallion, but his performances in both races again highlighted his talent,” Waller said.

“After that he never quite was the same horse. I will certainly be supporting and helping to promote D’Argento as a stallion.”

“D’Argento raced against the creme de la creme and just did not know how to run a bad race.

“Once stud masters have reviewed his races, I will be surprised if they are not similarly in awe of just how good this horse really was.”