Birthday boy Jason Thompson, who turned 51 today, would have been elated – and relieved – with his megastar Hooked On Scotch’s return to racing tonight.

Contesting his first race in four months, Hooked On Scotch was a “bit rusty” and “took the entire straight to get there” in the Stan Lake Memorial (450m) at Warrnambool.

Hooked On Scotch was pitted against only four rivals in the race that honours a Warrnambool greyhound racing legend and GRV Hall of Famer, but had to pull out every centimetre of his champion qualities.

The dual Group 1 winner jumped fairly from his wide draw but was burned off early by speed sensation Speed Star. And when they turned for home, he certainly had the job ahead of him.

But, as they say, never write off a champion! 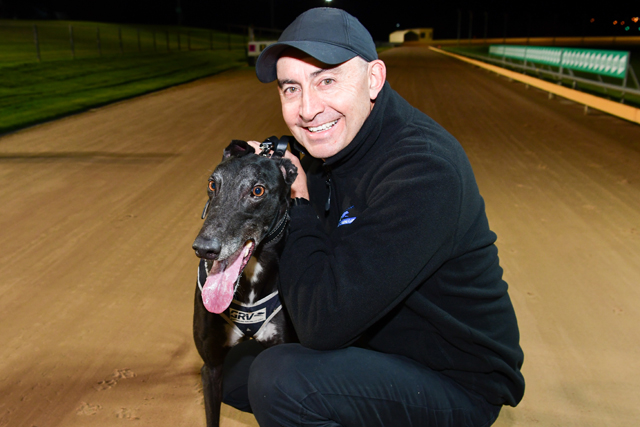 Bred and owned by father-and-son team Michael and Darren Puleio, Hooked On Scotch (Dec ’17 Barcia Bale x Nicki Fields) was having his first start since winning a Group 2 Warragul Cup heat (460m) in a near-record 25.34sec on January 3.

Dubbed “the fastest chaser on the planet”, Hooked On Scotch has won five group race finals, including the G1 Adelaide Cup and G1 Hobart Thousand, and holds Sandown’s 515-metre track record (28.94sec). He was also third in the G1 Melbourne Cup.

Hooked On Scotch is also known as the “people’s champion” due to his high profile – even with the non-racing public.

I’ve been writing on the sport for nearly four decades but greyhounds like Hooked On Scotch still give me that pit of anticipation in my stomach. And I’m glad to say tonight I was elated – and relieved!

WATCH: Hooked On Scotch (7) sprouted wings in the dying stages to score a narrow win in sub-25 seconds.