A noted brilliant beginner, Zambora Smokey ($2.00F) came out smokin’ from box two and led from go-to-whoa in defeating dual Group 1 winner Simon Told Helen ($2.50) by one length with rank outsider Leon Bale ($45.00) a further two and a half lengths away third in a sizzling 24.80sec. (Leon Bale’s trainer, Andrea Dailly, rugged four finalists and was chasing her fourth Warrnambool Cup victory.)

Zambora Smokey, who only turned two on April 30, notched his eighth straight win and his winning time was just over one length outside the 450-metre track record of 24.72sec set by Unlawful Entry in April 2016. He is also undefeated in four starts over 450 metres at Warrnambool.
Bred and owned by Charlie Azzopardi in Leppington, NSW, Zambora Smokey recorded his 12th win from 16 starts. The $31,500 first prize catapulted his earnings to $52,415. 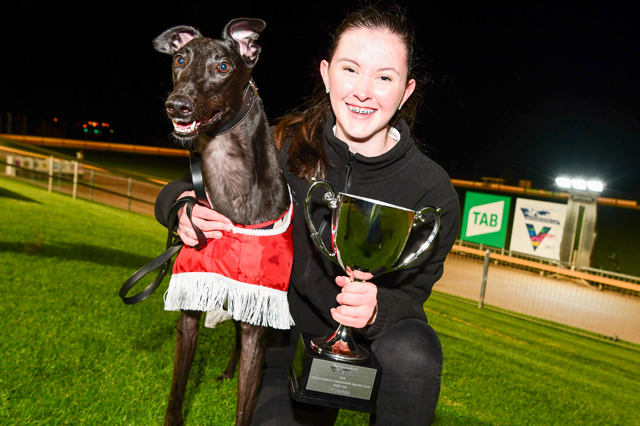 He also emulated his sire, Zambora Brockie, who won the 2016 Warrnambool Cup.

RSN racecaller James Van de Maat tipped Zambora Smokey to win and was gobsmacked by his performance.
“What a blistering run,” James said in his call. “Zambora Smokey has landed the Warrnambool Cup in mighty fine style. It was a complete reversal to what happened in his heat when he came from behind to run down Simon Told Helen.”

WATCH: Zambora Smokey (2) gets off to a great start before being challenged by Simon Told Helen (1) and kicking away.