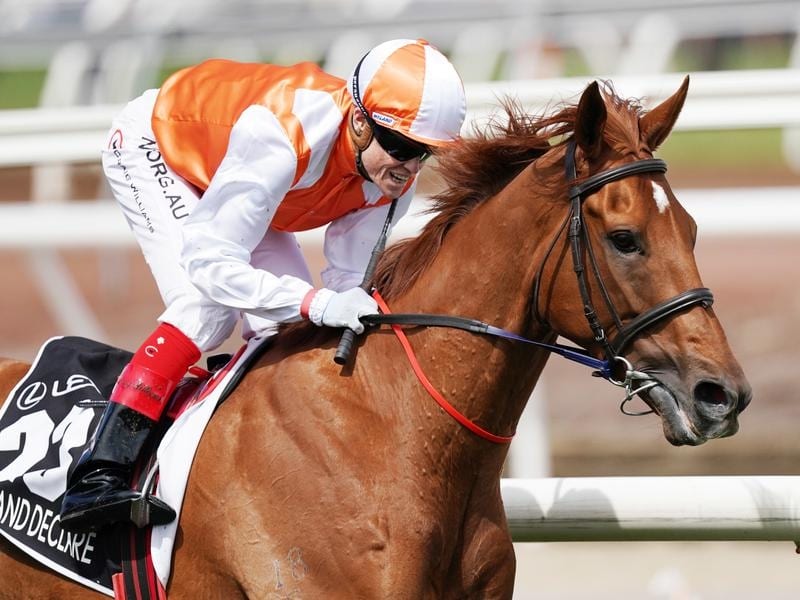 Melbourne Cup winner Vow And Declare will be a headline attraction at Flemington.

Trainer Danny O’Brien will use staying races on his home track at Flemington for his bid to defend Vow And Declare’s Melbourne Cup crown.

The first of those is Saturday’s William Newton VC Handicap (2600m) which leads to the Andrew Ramsden Stakes (2800m) at Flemington on May 16.

O’Brien is hopeful the Victoria Racing Club may add another quality handicap in June or early July to keep Vow And Declare ticking over for November’s Melbourne Cup.

“If that was available there would be a chance we could run him again,” O’Brien said.

Vow And Declare raced through late autumn and early winter in Brisbane last year before returning to Victoria for two spring starts ahead of the Melbourne Cup.

O’Brien was hoping for a similar trip this year, but the cancellation of next month’s Doomben Cup and the Q22 at Eagle Farm in June due to COVID-19 restrictions caused a rethink by O’Brien.

“What we’re trying to do is follow what we did last year,” O’Brien said.

“Do a bit of racing over May and June and hence have that shorter break between that and his first run in the spring.

“It really worked well for us last year having the run in Turnbull Stakes and the Caulfield Cup.

“We’re lucky these races are on at Flemington, they’re a nice plan B given Queensland is not an option, so we’ll just work with what it is.”

O’Brien said Vow And Declare would remain in work at his Barwon Heads property with a likely spring starting point of again the Turnbull Stakes (2000m) at Flemington in October.

Stablemate Russian Camelot will complete his South Australian Derby preparation under Damien Oliver at Flemington in the Peter Armytage Handicap (1700m) rather than the Chairman’s Stakes (2035m) at Morphettville.

“I was keen to give him another run before the Derby and the Flemington race was the better option,” O’Brien said.

“Ollie can ride and then he only needs the one trip to Adelaide.

“I think the race is ideal.”

John Allen, who entered isolation in Adelaide last Friday, will ride Russian Camelot in the Derby on May 9.