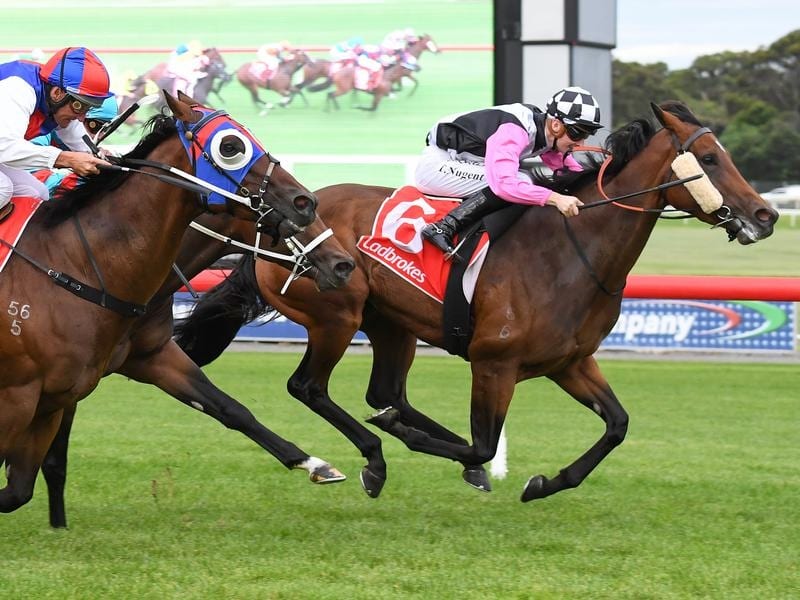 Australasian Oaks candidate Beauty Bolt (r) has gone from Melbourne to Adelaide for her G1 test.

Grahame Begg has done his job to prepare Beauty Bolt for the Australasian Oaks, the rest is now up to the filly.

Beauty Bolt left Begg’s Caulfield stable on Thursday night for Adelaide where local trainer John Hyam will stable her until Saturday’s Group One race over 2000m for three-year-old fillies at Morphettville.

Because of COVID-19 protocols requiring any person crossing state borders to undergo two weeks isolation, Beauty Bolt and stablemate Vanuatu, who runs in the Queen Of The South Stakes, are heading to Adelaide without any member of Begg’s team.

Begg is apprehensive, but has attempted to make the trip as comfortable as possible.

“I’ve sent them across with the feeds they’re going to have for the next three days and it’s one of the reasons I didn’t think of running her in any of the lead-up races over there.

“At least this I way I could train her here and keep an eye on her.

“I brought her up to Caulfield for the last two weeks of the preparation, so hopefully it might be a master-stroke, or it may end up being a dummy-stroke, who knows.”

A first-up winner at Sandown in March, Beauty Bolt has had one subsequent start, finishing eighth over 1400m at Caulfield on April 4.

Begg was not disheartened by the performance after Beauty Bolt was slowly away and settled at the tail on a track suiting leaders.

“Her last 200-metre sectional was the second best in the race,” Begg said.

“She’s had a subsequent jump-out at Sandown which was good so the month between runs is not a worry.

“I was going back through her form and I just reckon she races best when her races are spaced.

“I thought giving her a month between runs and a jump-out in between would have her fresh for the race.”

Begg is unconcerned by Morphettville’s soft track conditions for Beauty Bolt who will jump from barrier one under Dean Holland.

“Dean knows his way around and has ridden there plenty of times before,” Begg said.

“Hopefully the inside won’t be any disadvantage. He can put her to sleep and hopefully get the right runs at the right time.”