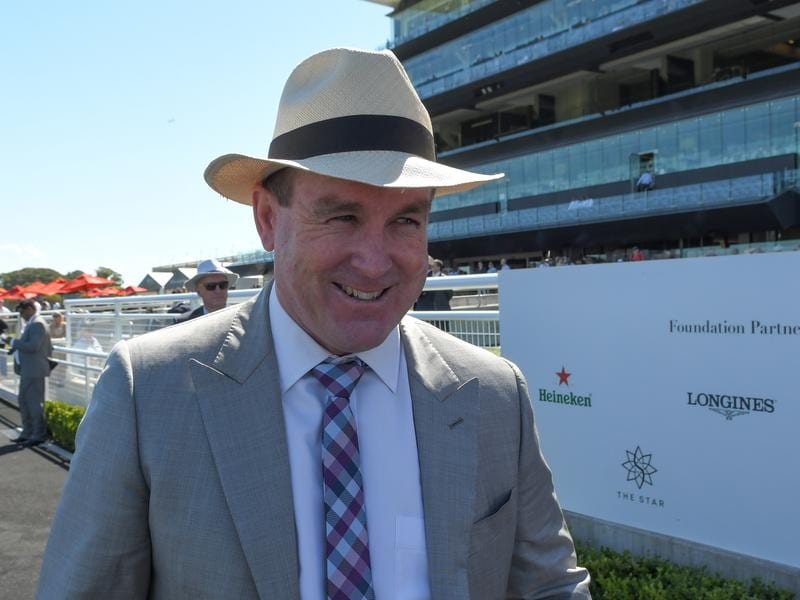 Trainer John O’Shea is eagerly awaiting the debut of 2yo filly Newsreader at Randwick.

Trainer John O’Shea can be a hard marker when it comes to horses, but juvenile Newsreader has won him over despite having never raced.

The well-named daughter of Press Statement will make her debut in Saturday’s Cellarbrations Handicap (1000m) against a mostly experienced field, headed by city winners Wild Ruler and Sancy.

Despite her newness, O’Shea is confident the juvenile will not be out of her depth.

“It’s a really strong race but I was telling my young foreman this the other day, she did a piece of work for us on Tuesday morning and they don’t work like that and not run well,” O’Shea said.

Newsreader heads to the races off the back of one trial, finishing third in a recent heat at Randwick with James McDonald aboard.

Unable to make her 54kg weight, he will partner rival El Buena for Chris Waller on Saturday with Brenton Avdulla linking with Newsreader.

O’Shea admits he would have preferred Newsreader to have another trial under her belt before her debut but feels she has the attitude and ability to cope.

“She has been a delight all along. She is very willing,” O’Shea said.

“We thought quite highly of her then James gave her his stamp of approval, albeit it was only a 740 metre trial, it was still a nice enough effort.”

The Listed Woodlands Stakes (1100m), usually held at Scone but moved to Rosehill this year because of coronavirus protocols, will be the aim for Newsreader if she is competitive at Randwick.