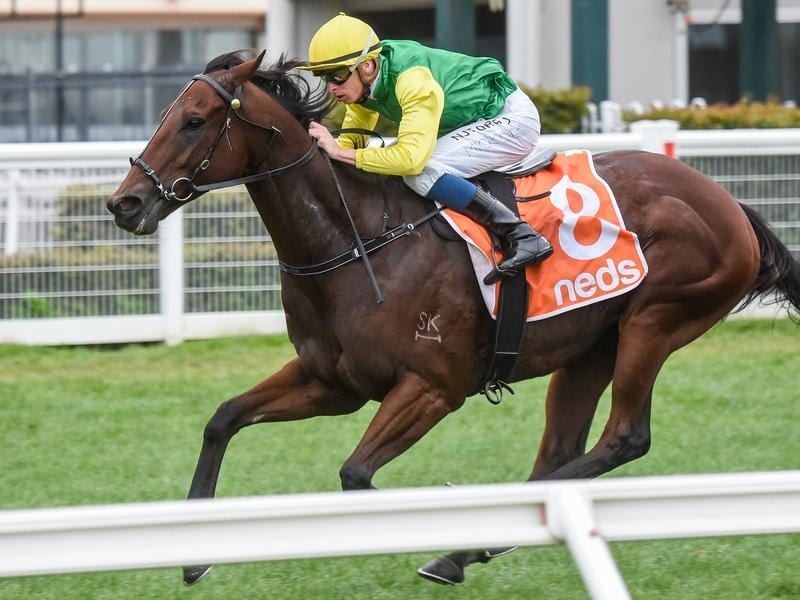 William Thomas will be out to claim another 1100m-sprint race at Caulfield.

Trainer John Price says William Thomas will need to reach a new level if he is to win successive races at Caulfield.

William Thomas produced a scintillating turn of foot, coming from last at Caulfield on April 18 to win the Listed Bel Esprit Stakes (1100m).

He returns to the track on Saturday over the same distance in the Lamaro’s Hotel South Melbourne Handicap, this time with considerably more weight.

Saturday’s line-up is not dissimilar to the one he blitzed three weeks ago, but this time William Thomas rises from 56.5kg to 60kg.

“That certainly was a personal best for him,” Price said.

“I thought he had a level that was slightly under that, so it was very pleasing to see.

“He’s carrying 60 kilos in this race so hopefully he can rise again.”

Price said William Thomas was lucky to be alive, let alone racing, after almost bleeding to death after a paddock accident.

The time on the sidelines resulted in a change of mentality for William Thomas.

“We sent him to a water-walker and he ended up hurting himself quite badly,” Price said.

“It was just one of things, but he had a nasty cut on a heel that got one of the main arteries and he nearly bled out.

“He’s had four wins since, so that’s well and truly behind him.”

William Thomas is lightly raced for a rising six-year-old having started 20 times for seven wins, a record Price says could be even better.

Price said as a younger horse William Thomas wanted to get his races over and done with, so he worked on teaching the sprinter to relax.

It worked with Price now describing William Thomas an all-rounder.

“We had that issue of him over-racing early days and I’m certain that cost him a couple of races,” Price said.

“Now he’s racing the complete opposite but still capable of achieving a result.”

Even though William Thomas is a good traveller, Price is in no rush to head interstate.

“There’s plenty of good races for him here in Victoria,” he said.

“If there isn’t a suitable race one week, there will be the next.”