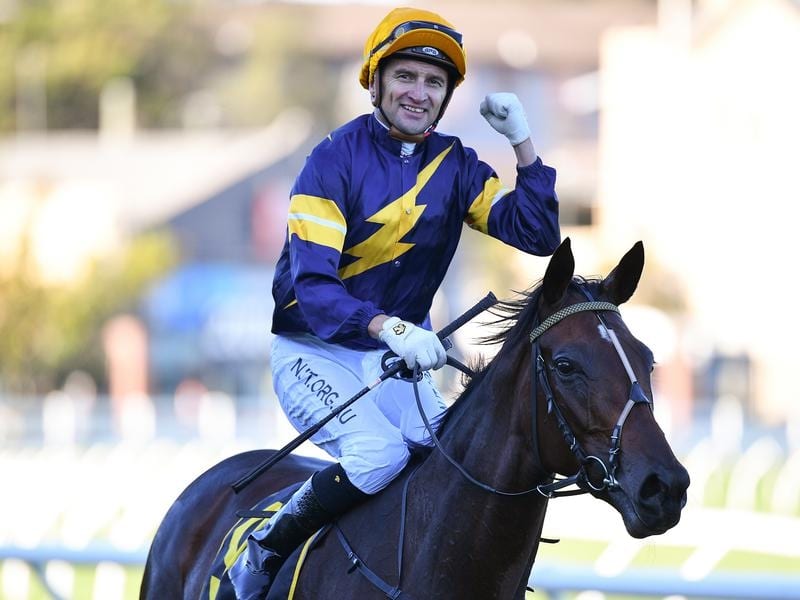 Tofane has denied Pierata a winning farewell with a thrilling victory in the All Aged Stakes.

Tofane has crashed Pierata’s farewell party with a last-stride win in the All Aged Stakes to end Group One racing in Sydney for the season.

Pierata ($5.50) gave his rivals the slip halfway down the straight with Tofane ($12) the one to give chase.

Under hard riding from Opie Bosson, Tofane gave her all to nail Pierata by a half head in his final racetrack appearance before he joins the Aquis stallion roster.

Fasika ($12) led the rest of the field, 2-1/2 lengths behind Pierata with three-year-olds Super Seth and Bivouac fourth and fifth.

The win capped a successful carnival for leading New Zealand jockey Bosson who hinted he may be back sooner rather than later with racing and training shut down across the Tasman because of the COVID-19 pandemic.

“She got into a beautiful spot and followed the horse to beat. It was a real dog-fight down the straight,” Bosson said.

“I wasn’t sure if I won or not. I didn’t find out until I saw the screen when I got back.

“Not much is happening back home at the moment, so it’s good to be here and good to get a few results.

“I go back on Tuesday and then we have to have a bit of a discussion to see whether we move the family back to Australia or not. I’ve got a few things to sort out first.”

Bosson’s Sydney autumn wins include the Group One Chipping Norton on Te Akau Shark and Australian Derby on Quick Thinker.

Tofane’s trainer Mike Moroney watched from Melbourne where he is stranded because of coronavirus travel protocols.

He has always had an opinion of Tofane and aimed high this autumn.

“We decided after her spring campaign that we would only target Group One races this autumn,” Moroney said.

“I told her owners she would get beaten in a few but I know she will win one.

“Her form had been great. I thought she should have run second in the Newmarket then she ran really well for third in The Galaxy, beaten a nose and a nose.

“This is a great result and we will put her away now and set her for The Everest in the spring.”

Moroney operates stables on both sides of the Tasman but the All Aged signalled a first elite victory in combination with Bosson.

“Opie has ridden on and off for me over the years back in New Zealand and even when we were winning premierships we didn’t have a lot of luck together,” Moroney said.

“He does most of his riding for Te Akau Racing and we know he is a world-class jockey but this is our first Group One win together.”