The winners will still keep coming for Team Edmonds despite losing two juvenile stable stars to Southern and overseas stables. 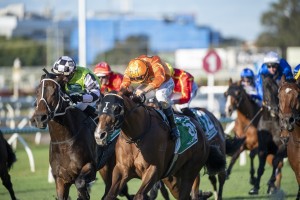 Tyzone, above in orange colours, wins the 2020 Stradbroke Handicap at Eagle Farm for Team Edmonds. Photo by Steve Hart.

Three times winner Wisdom Of Water is part owned by Aquis Racing and will be prepared for the Spring by the Caulfield training team of Mick Price and Michael Kent Jnr.

Group 1 J J Atkins placegetter The Drinks Cart will now head to Hong Kong to be trained by Tony Cruz if he passes the vet on Thursday.

“It was the owners’ calls and they are entitled to do what they want,” Toby Edmonds told AAP.

“The Drinks Cart will be vetted on Thursday and if he passes he will go to Hong Kong to be trained I understand by Tony Cruz.

“Wisdom of Water will head south. He is now part-owned by Aquis who are looking at him as a sire later in his career.

“For us it is business as usual to find some more winners.”

Gold Coast trainers Toby and Trent Edmonds have had plenty of success at Eagle Farm over the revamped Queensland Winter Carnival with Tyzone winning the Group 1 $350,000 Stradbroke Handicap (1400m) on June 6 and Vanna Girl winning the Group 2 $175,000 The Roses (1800m) last Saturday.

Two year old filly Smart ‘N’ Sexy is also set for bright future after winning the Listed $85,000 Dalrello Stakes (1200m) at Eagle Farm last Saturday but won’t accompany Vanna Girl to the Melbourne Spring Carnival but will be set for the Magic Millions Carnival in January.

“She has done a great job and when the gap presented itself he went to the line good,” Toby Edmonds said.

“She will now have a break and come at Magic Millions time.”

Team Edmonds has already highlighted future winners on twitter with their Trackwork specials and have identified Saturday Doomben entry Maozi as a star worker on Tuesday morning.

Unraced I Am Invincible filly Tayella was also a star worker on Tuesday morning at the Gold Coast.