It was yet another Chris Waller domination at Eagle Farm on Saturday with his Group 1 placegetter Brimham Rocks beating home three of his stablemates for the first four in the Group 3 $175,000 Tattersall’s Cup (2400m). 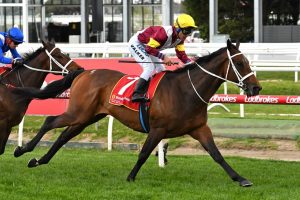 A fortnight back at Doomben Waller trained the first six past the post in the Group 3 Chairman’s Handicap (2000m).

Continuing a strong Brisbane Winter Racing Carnival for the stable, and following on from his trifecta in Sydney’s Listed Winter Cup (2400m) at Rosehill earlier in the day, Brimham Rocks defeated stablemates Savacool (2nd), Shraaoh (3rd) and the Chairman’s winner Le Juge (4th) home in the Tattersall’s Cup results for 2020.

With local pacemaker Kubis up front setting only a moderate speed, Maloney settled Brimham Rocks in a lovely trailing position fourth the fence and the horse travelled strongly throughout.

Getting out into the clear once on the straight, Brimham Rocks was able to score comfortably for a 2.25 length win while his stablemates fought it out in a photo for the minor placings.

“It looked a really good race for him he was one of probably two or three genuine proven stayers in the field, fourth up he was really hitting peak fitness and from the gate got a beautiful run on the speed and he duely won well,” assistant trainer Paul Shailer told the media.

“Excellent ride from Ryan (Maloney) the pace was only steady throughout, he stayed nice and close to it popped off the fence at the home turn and let the horse show his staying qualities.

“I thought Le Juge was very good again carrying a bit more weight and over 2400 metres Michael Cahill did a great job switching him off when he usually gets a bit keen.”

“Shraaoh was as honest as ever she probably wants another race over this distance and Savacool ran right up to expectations, Brimham Rocks was just the superior stayer on the day.”

Brimham Rocks ran second in the 2018 The Metropolitan behind the Waller-trained Patrick Erin, a Group 1 race held on Epsom Handicap Day in the spring that Waller also won last year with Come Play With Me.

The $750,000 feature over 2400m takes place at Randwick on October 3 this season and Brimham Rocks is at $34 in futures betting on the classic at Ladbrokes.com.au.