Trainer Chris Anderson is hoping the connections of Ballistic Boy resist the offers from Hong Kong and leave the three year old in Australia following his win in the Group 3 $175,000 7 Racing Rough Habit Plate (2200m) at Eagle Farm today. 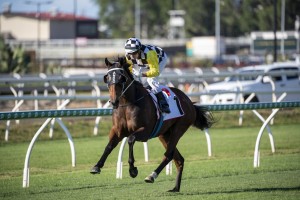 “He will probably go to the paddock, that is if we don’t sell him to Hong Kong,” Anderson said.

“There has been a few offers in the past and hopefully he can stay in Australia and have a bit more fun with him.”

Ballistic Boy was sent out as the $2.80 favourite and responded magnificently from a superb ride from Brad Steward to dominant in the run to the line.

Stewart had Ballistic Boy travelling in the middle of the pack for the majority of the race and started to creep forward approaching the home turn.

Ballistic Boy claimed the leaders at the 250m and went on to record a comfortable one and a half lengths win over the Michael Costa trained Supergiant ($4.60) with the pacesetter Navy Cross ($6) hanging on for third.

“Brad Stewart just gave him a peach of a ride,” Anderson said.

“A great thank you to Think Big Stud. They have been a great supporter of my stable and to train a Group winner, my first Group winner with those colours, it is s a boyhood dream.”

Ballistic Boy had been racing consistently in the lead up to the Rough Habit Plate and was able to turn the tables on Supergiant who beat him a nose in the Group 3 $115,000 Gunsynd Classic (1800m) a fortnight ago.