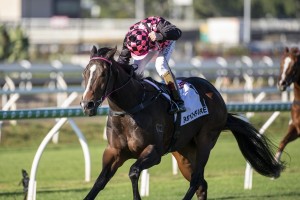 Rothfire, above, careers away from his opposition to win the 2020 J.J. Atkins at Eagle Farm. Photo by Steve Hart.

Rothfire went into the Group 1 for the two year olds as the $3.50 favourite and emerged as a genuine contender for the $15m The Everest (1200m) at Randwick on October 17.

Winning trainer Robert Heathcote said that he had already had preliminary discussions with miRunners who hold a slot for The Everest and is looking forward to talking to them again.

“He climbed his Everest today. He needed to do that today against a really good field of two year olds,” Heathcote said.

“He will go to the paddock on Monday  and we will give him a nice break and will set a program in concrete. As we get closer there are a couple of races down in Sydney and maybe now that might open the door (for The Everest).”

“I did an interview with miRunners. As we know miRunners have bought a slot in The Everest and they interviewed me the other day and said that he was certainly in the running for that, particularly after what Yes Yes Yes did last year.”

Heathcote is also looking towards the Group 1 Coolmore Stud Stakes for the three year olds over 1200m down the Flemington straight during the Melbourne Cup Carnival.

Winning rider Jim Byrne had Rothfire smartly out of the gates and settled him in third spot until shortly after heads were turned for home and once he released the brakes, he careered away to record a three and a quarter lengths win.

Gotta Kiss ($20) ran on for second just ahead of The Drinks Cart ($21) who was also doing his best work at the finish.

“I think that is the beauty of having a guy like Jimmy on. He has just been so cool and calm like the horse. I have been the nervous wreck,” Heathcote said

“And he even said going out, you know we had a little chat, and he said I will take a sit if they want to serve it up because they won’t beat him.”