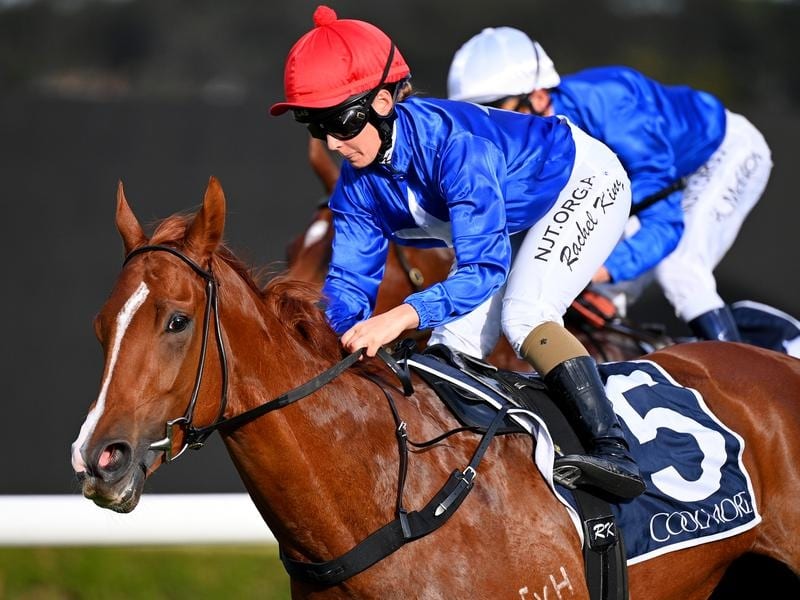 Trainer John Thompson says Fituese is a filly going places after her win in the Denise’s Joy Stakes.

Promising filly Fituese has continued a rise through the grades to claim her first stakes win in dominant fashion at Rosehill.

The three-year-old could now be in line for a Queensland campaign after taking out Saturday’s Listed Denise’s Joy Stakes (1100m) against her own age and sex.

Well-supported to start the $1.75 favourite, the John Thompson-trained filly did not let her supporters down as she raced to a 1-1/4-length victory under Rachel King.

It was a fifth win from seven career starts and second from as many starts this preparation.

After settling midfield and one off the fence, Fituese was given clear running from the top of the straight and highlighted her promise as she raced clear of runner-up Aquitaine with Sally’s Day another half-length away third.

“There was more pressure than we were expecting but credit to Rachel, she didn’t panic,” Thompson said.

“She just let the horse travel, gave her plenty of room in the straight and she did the rest.

“I was worried today. There were some pretty good fillies in this race. I’ve got a healthy respect for the second horse and to win like that, she’s a filly going places.

“We’lll see how she comes through this. There’s a couple of races in Queensland that she could possibly head up for.”

Fituese does hold a nomination for the Group One Stradbroke Handicap (1400m) and firmed from $26 to $15 after Saturday’s win.

King said Fituese was “a dream to ride”.

“She’s so professional and has been from day one,” King said.

“I like the way that even though she’s progressing through the grades, nothing has changed. She’s still got that super cool attitude.

“You can put her wherever you want in a race.”