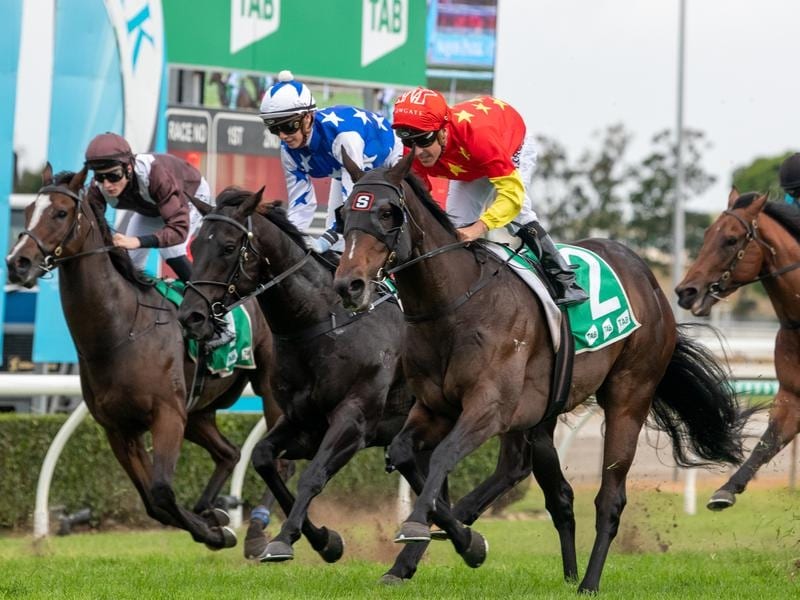 Hightail (right) has made up for past Gold Coast disappointments in winning a Group Three race.

Sydney gelding Hightail finally had things go his way in a Gold Coast feature race and was rewarded with a Group Three win.

Hightail ($3.60) was given the run of the race by jockey Ryan Maloney before he wore down the unlucky The Odyssey ($7.50) on the line in the Gold Coast Guineas over 1200m.

In both those races there were solid arguments to say Hightail should have finished closer.

The pattern of the race suited him far better on Saturday as there was a frantic early pace which was reflected in the winning time of 1 minute 8.71 seconds.

It was the third win in the race for co-trainer Peter Snowden who took it in 2008 with El Camino and 2013 with Academus.

Hightail’s win was his second in partnership with his son Paul.

Maloney was impressed with the effort of Hightail who had won first-up at Randwick at his previous start.

“They went very quick in front and he really found the line in the final 100m,” he said.

“I got to The Odyssey at about the 200m but he just kept giving and my bloke had to find plenty.

“Hightail was probably a pair closer than I wanted but he travelled beautifully and I think there is a good race in him up here.”

He is entered for the Group One Stradbroke Handicap at Eagle Farm on June 6 and Snowden is likely to make a decision on a run this week.

Bookmakers shortened Hightail’s price from $25 to $15 for the Stradbroke.

The Odyssey turned in an outstanding run as he was four deep in a battle for the lead early.

The gelding took the lead on the home turn and was still in front near the line.

“I was worried all week since he drew very wide and with good reason. But he really raced well,” trainer Kelly Schweida said.

In a small consolation The Odyssey went over $1 million in prize money with his second.

Exhilarates ($3.90) came from near last to grab third and could also be Stradbroke bound.