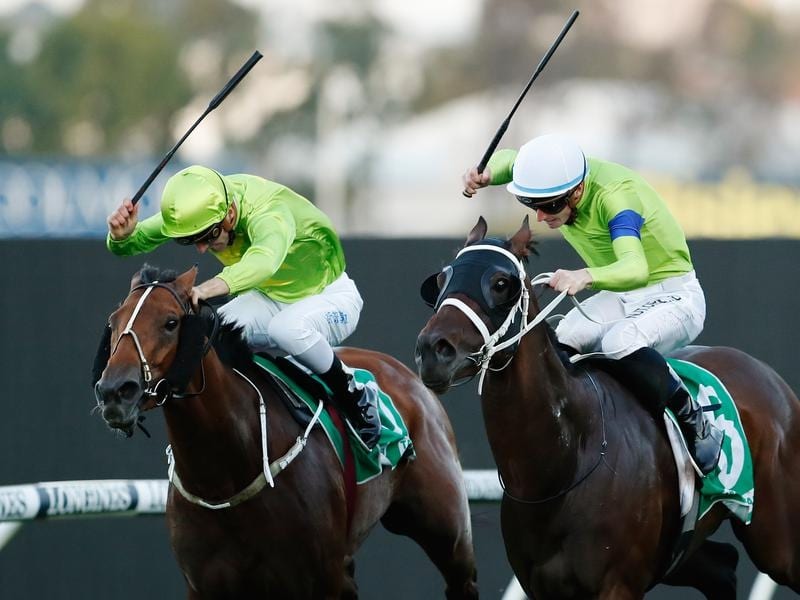 Oakfield Missile (left) has snatched victory from the favourite True Detective at Rosehill.

Damien Lane admits he was left deflated after Oakfield Missile finished fourth for the second-straight year in the recent $400,000 Provincial Championships Final at Randwick.

But it was a different story for the Wyong trainer after Oakfield Missile wore down favourite True Detective to win The Gallipoli Benchmark 78 Handicap (1300m) at Rosehill on Saturday.

Five-year-old Oakfield Missile won a Provincial Championship Qualifier at Newcastle in the first start of her current campaign before her fourth to Through The Cracks in the Final at Randwick on April 11.

Oakfield Missile did not get the clearest passage at a crucial stage in the straight that day but there were no such problems on Saturday, with jockey Sam Clipperton positioning the mare midfield on the rail before taking an inside run in the straight.

“It was hard to watch the other day in the Provincial Championships Final,” Lane said.

“Two years in a row, and I must admit I walked off pretty deflated. I’m not sure if she would have won but I think she would have finished right there.

“She hasn’t put a foot wrong since. She’s probably one we’d normally go three weeks between runs with but she just came through that run so well and this looked a good race for her.”

It was a first metropolitan win for Oakfield Missile who has five wins from 21 starts, and Lane is hopeful the mare can secure valuable black-type at stakes level in the future.

“She is in really good form and it is good she has come back,” Lane said.

“I’m really happy with her.”

“Her racing pattern leads to her needing a lot of luck but today I got a lovely saloon passage through and she dug deep when I really asked for a superior effort,” Clipperton said.