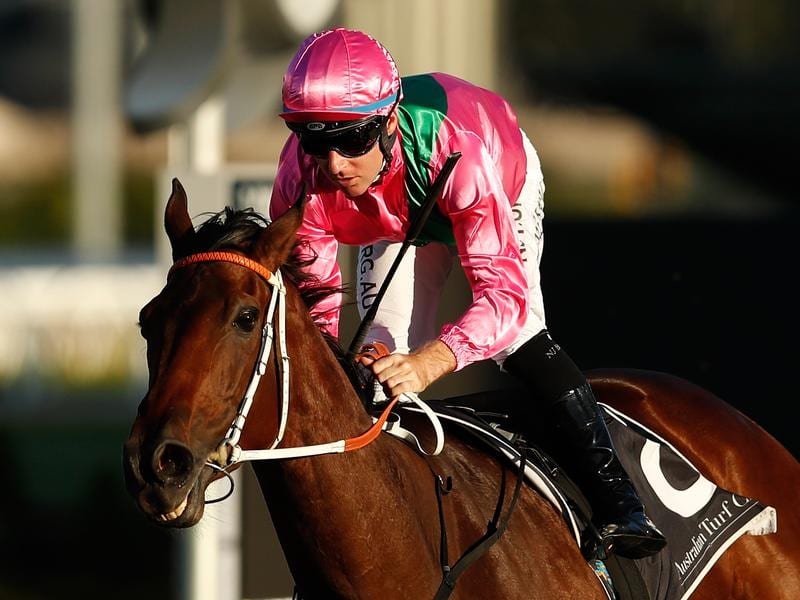 Jockey Tommy Berry has redeemed himself on Amangiri with a Group Three Hawkesbury Gold Cup victory.

Tommy Berry is hoping he has done enough to square the ledger with the Hawkes family after lifting family horse Amangiri to victory in the Group Three Hawkesbury Gold Cup.

The mare is raced by Jenny and Clare Hawkes, the wives of father and son co-trainers John and Michael, and Berry says he owed them for his narrow defeat on her in last year’s Adrian Knox Stakes.

“It’s a family horse and I’m not sure if Mrs Hawkes has forgiven me for the time I got beat on her a couple of preps ago yet, so it was nice to get one back,” Berry said.

“It was looking a little hairy at the top of the straight once again but it was a massive improvement getting back on top of the ground, she had those two nice runs that got her fitness to where it needed to be and she was a lot more relaxed in the run today. That helped her finish off late.”

Amangiri ($4.80 fav) enjoyed a perfect trail in fourth but was chopped out when she went for an inside run at the top of the straight.

Berry switched her around heels and she regathered herself to take out Saturday’s Rosehill feature by a long neck over Live And Free ($7) with Another Dollar ($31) a nose away.

John Hawkes revealed the mare’s colours of pink with a green sash originally belonged to his mother-in-law Gwen and were given a new lease of life by wife Jenny.

“Jen kept the colours and sort of moth-balled them for years,” Hawkes said.

“She watched the race downstairs at home and she was a bit emotional.

“Amangiri is a family horse. She is a lovely mare, very genuine. She is not elite but she hasn’t had much luck in the Group One races she has contested.”

With only essential workers allowed on track at Rosehill because of coronavirus restrictions, Clare Hawkes also had to cheer Amangiri from home.

While she would have liked to be on track to celebrate she was still planning to enjoy the win.

“My hands are red-raw from clapping and straight after the race I rang Michael and burst into tears,” Hawkes said.

“This is what racehorse ownership is about.

“I rang Jenny and she is actually the same. That was so good.

“Michael and I haven’t had a drink since the races went behind closed doors but there is a bottle of champagne in the fridge and it is going to get opened tonight.”

John O’Shea was rapt with the effort of Live And Free and expects him to be hard to beat next start in the Scone Cup.

“He has gone super. It was always a risk over the 1500 metres at Rosehill that they might have gone steady and that’s what they did,” O’Shea said.

“He will be better for that run and goes to the Scone Cup.”