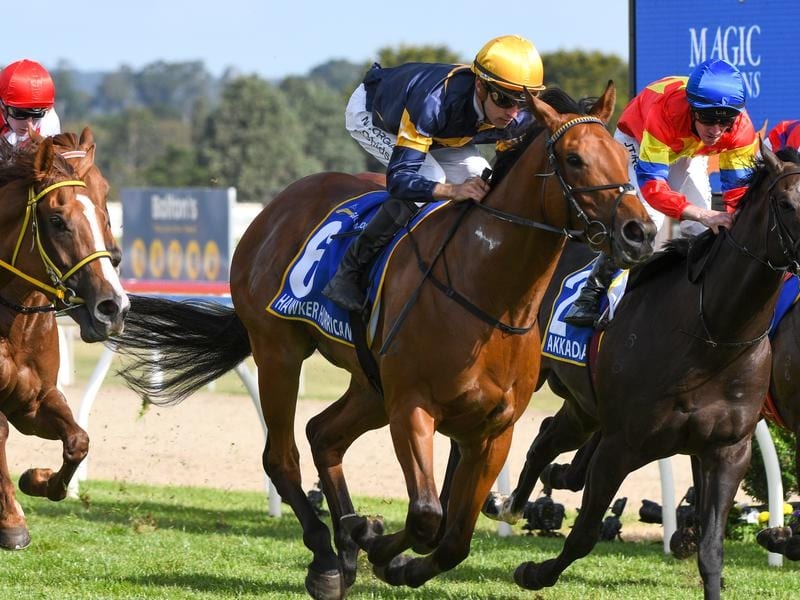 Trainer Mike Moroney believes Hawker Hurricane can be a force in the Listed Wangoom at Warrnambool.

After farewelling the best three-year-old in his stable, trainer Mike Moroney is looking to another to win a feature race against older horses.

Group One C F Orr Stakes winner Alabama Express has joined the ever-growing list of this season’s retirees and will stand at Yulong Stud in the spring.

Moroney is having one of his best seasons and is turning his attention this week to Warrnambool and the two feature flat races, the Wangoom and the Cup.

He believes Hawker Hurricane has the class to topple the older horses in the Wangoom but first he has to gain a start.

Hawker Hurricane is 25th in the ballot for Wednesday’s Listed 1200m-sprint with Moroney also planning to start Mr Marathon Man.

The Wangoom has a field limit of 16 plus emergencies.

The Moroney-trained Mirimar runs in the Warrnambool Cup (2350m) on the same day and is expected to get rain-affected conditions to suit.

Hawker Hurricane has had three starts this preparation with his most recent two in Sydney where he was a close fifth in the Listed Darby Munro Stakes at Rosehill before fourth in the Group Two Arrowfield 3YO Sprint (1200m) at Randwick.

Those races were on soft and heavy tracks respectively.

“He’s not far off the better ones.

“He was terrific up in Sydney and wasn’t beaten by big margins in good races.

“He does handle wet ground a bit so I think he’ll be a real chance.”

If the track is testing Moroney believes that would bring Mr Marathon Man right into contention.

“If he does things right and goes straight, he’s a talent too,” Moroney said.

“But he just does a few things wrong.

“We’re going on the fact that if it’s really heavy it’s going to bring him right into it because he probably really wants to go 1400 metres.”

Moroney believes six-year-old import Mirimar can bounce back to his best after failing over 2600m at Flemington last start on a good track.

Before Flemington, he won on heavy ground over 2400m at Caulfield.

“He has come out of his last start at Flemington fine,” Moroney said.

“He over-raced off a really strong speed the other day and it just told and he didn’t finish it off.

“In saying that the track was pretty firm and he’s a wet-track horse so the Warrnambool Cup will suit him better.”

Progressive import Buffalo River, who races in the same colours as Mr Marathon Man, will be spelled after his fifth Australian win at Sandown on Saturday.

Moroney and his group of prominent owners who include Rupert Legh, have their sights on spring features such as the Group One Sir Rupert Clarke Stakes, Toorak Handicap and Cantala Stakes.