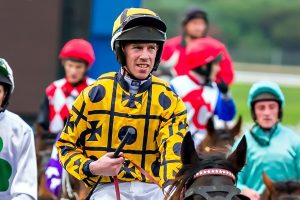 Melbourne horseman O’Brien had targeted the Morphettville classic a long way out, and remained confident he had the right horse to win despite Russian Camelot suffering a few setbacks on way to the Derby.

“He’s been a very exciting horse, not just for us but for the public, since his very first start,” O’Brien told Racing.com.

“We’ve had to do something that hasn’t been done before, take him to a Derby against the Australian three-year-olds.

“We were always confident the motor was there, particularly once he got over a bit of ground, and it was an enjoyable watch today.

“It’s weird in Australia but his father Camelot won the English Derby second-up.

“We bought the horse from England and bought the training manual with him.”

The up-and-comer could not have been more impressive in his April 9 lead-up winning a mile Benchmark 64 at Pakenham by seven lengths carrying 61.5kg.

The favourite backers were in for a scare early in the SA Derby however when Russian Camelot jumped away only fairly and jockey John Allen found himself out the back three-deep with no cover.

The favourite remained deep at the tail end of the field the entire journey, looking in a hopeless position when at the 400m Moonlight Maid put the pressure on the front runner to move up and hit the lead a long way from home.

As they came to the corner, Dalasan looked to be cruising chasing his third win on the trot, while Moonlight Maid kicked away at the 200m looking to beat home the boys.

Anthony Freedman’s VRC Derby champ from the spring Warning was quickly on the scene also getting the split at the furlong mark, but all eyes were quickly on the fast finishing top elect who came bounding with a big late run.

Jockey Jason Holder finally found the fence with Dalasan, but he was no match for the phenomenal winner Russian Camelot who hit the front 60m out and charged through the line for his first Group 1 success at just his fifth start.

The best three in betting filled the trifecta with Warning running on for third, while the Lindsay Park-trained filly Zayydani was the best of the girls finishing four lengths back fourth.

“Danny said to ride him like he was the best horse in the race and he was confident if he was close enough on the corner, he would the better turn of foot,” Allen, who celebrated his third SA Derby win following earlier success aboard the Darren Weir-trained duo Howard Be Thy Name (2016) and Volatile Mix (2017), said.

“It panned out that way. He was just the superior horse.”

The bookmakers were quick to react to the impressive South Australian Derby win with Russian Camelot firming into $15 second favouritism at Ladbrokes.com.au to win the 2020 Melbourne Cup over the two miles on Tuesday November 3.