A big drop in weight and an on-speed run were the key to getting the Stuart Kendrick-trained Tambo’s Mate over the line in Saturday’s BRC Sprint ahead of a likely shot at the Group 1 $350,000 Stradbroke Handicap (1400m) next month. 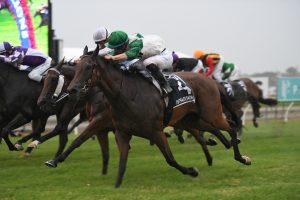 A reduced Brisbane Winter Racing Carnival line-up has seen the Group 3 $125,000 BRC Sprint (1200m) now serve as a key early lead-up to the Stradbroke at Eagle Farm on June 6, a race Sunshine Coast-based horseman Kendrick is keen to head towards with his improving four-year-old Tambo’s Mate.

“It gives us some confidence going forward into the next two legs now,” Kendrick said post-win on Saturday, confirming Tambo’s Mate would likely run in the Group 2 Victory Stakes (1200m) at Eagle Farm on May 23 before his Stradbroke bid a fortnight after.

Winner of the Listed Tattersall’s Recognition Stakes (1350m) at the track last November, the Mossman gelding added to his excellent Doomben record enjoying a drop back from 59kg last start at home on ANZAC Day to 54kg in the BRC Sprint.

Jockey Matthew McGillivray had to rev the horse up a little bit early to cross from barrier nine, but Tambo’s Mate did well to come back and settle into second as outsider Mishani Hustler led the field around.

There was a line of three across at the top of the straight, while Godolphin’s former Group 1 Randwick Guineas winner Kementari tried to work into the race down the outside after missing the kick.

After a lovely run in transit, Tony Gollan’s class mare and $3.80 equal favourite Outback Barbie just hit a flat spot once on the straight, ruining her chances of success.

In the end it was a two-horse battle over the final few strides with Tambo’s Mate holding off regular rival Deep Image, Robert Heathcote’s runner-up brave in defeat finishing second.

“He’s done a great job this horse. He was really tough today. It’s great to have Matty back on, he knows him really well.

“It was good to see him do that today.

“He’s a high-speed horse. He likes to roll along and he’s tough. He can run some really good sectionals.

“They’ve had a few good battles those two horses (Tambo’s Mate and Deep Image). I really like the way he dug in and fought it out.”

Outback Barbie was able to pick herself up again over the final furlong to run third and round out the BRC Sprint trifecta just ahead of her stablemate Vega One with less than a length separating the first four past the post.

Tambo’s Mate has firmed in from $41 to $18 in the pre-field Stradbroke Handicap 2020 odds online at Ladbrokes.com.au.

Outback Barbie is also rated an $18 shot for the Stradbroke, while Deep Image is at $31.