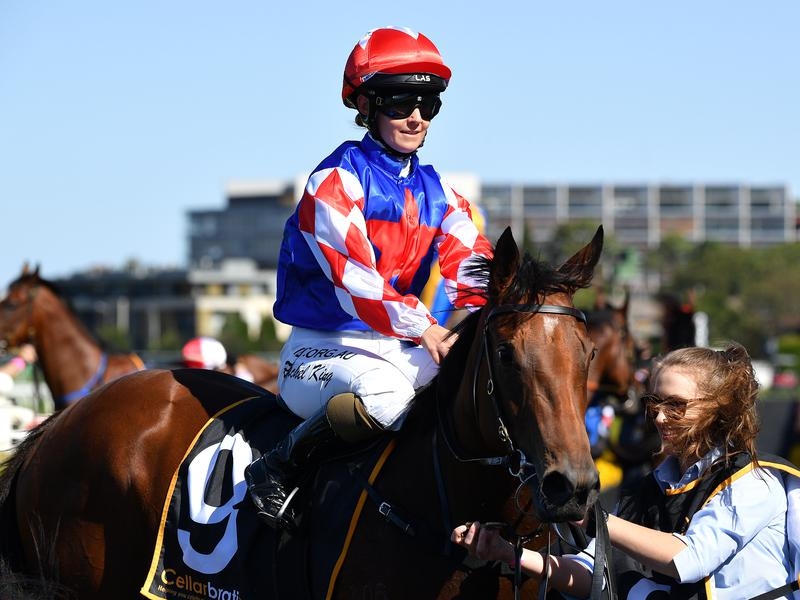 Filly Macroura has continued an outstanding two-year-old season for trainers Ciaron Maher and David Eustace, outpointing a handy field to win the opening race at Randwick.

The stable has enjoyed a heady season with its youngsters, winning the Magic Millions Classic with Away Game and stakes races with the likes of Prague and Holyfield.

The results have been especially rewarding given Maher and Eustace specifically aimed to develop a strong two-year-old team when they established their Sydney base.

“That’s what our focus soley was when we opened up the Sydney stable and we couldn’t be happier with the way things have gone for our first year there,” Maher said.

“The support of Aquis and Sheikh Khalifa and people like that, it has been phenomenal with horses like Away Game, Prague and Holyfield.

“They have all been fantastic two-year-olds and you would think they’d only be better at three most of them, definitely Prague and Holyfield.”

Macroura added her name to the stable’s list of talented two-year-olds, wearing down Inglis Nursery winner Wild Ruler to make it two wins from as many starts in the Cellarbrations Handicap (1000m) at Saturday’s Randwick-Kensington meeting.

Maher said the victory was no surprise and confirmed the filly would likely press on to the Listed Woodlands Stakes (1100m) in two weeks, usually held at Scone but moved to Rosehill due to coronavirus restrictions.

“We’ve had an opinion of her in the stable and she rated really well out of her first-up win,” Maher said.

“I was pretty confident, albeit it was a reasonably strong field on paper.

“We have waited for her and she is a filly that is in really good form and made nice progression from her first run to her second.

Rachel King has been a trackwork regular for Maher and Eustace in Sydney and made the most of her first race ride for the stable, settling Macroura behind the leaders and pouncing in the straight.

Backed from $7 to start a $5 favourite, Macroura scored by a short neck over Wild Ruler ($6) with Newsreader ($16) an eye-catching third another neck away.

Co-trainer Peter Snowden was happy with the first up effort of Wild Ruler and said he would be better for the run.

“He just over-raced a little as he was so fresh,” Snowden said.

“He’s a very nice colt and I would be surprised if we don’t push on to Brisbane.”

Debutante Newsreader did a great job at her first start and trainer John O’Shea confirmed she would face a rematch with the winner in the Woodlands Stakes.