Newcastle trainer Kris Lees can still find some positives in the underperforming Graff as he heads toward the Group 1 $350,000 Stradbroke Handicap (1400m) at Eagle Farm today. 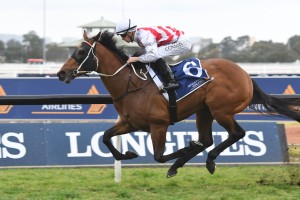 Graff, above, is one of the outsiders for the 2020 Stradbroke Handicap at Eagle Farm. Photo by Steve Hart.

Graff is marked as one of the outsiders at $26 with Ladbrokes.com.au for the Stradbroke Handicap and Lees admitted that he was disappointed with his final lead up run at Rosehill three weeks ago.

The Star Witness four year old was sent out as the $3.60 favourite in the Listed $112,000 Luskin Star Stakes (1300m) but never threatened before winding up in fifth place, three and a quarter lengths from the winner Ranier.

“I was a little disappointed in his last run but that said we’ve just changed things around, Lees told AAP.

Lees is hoping a change in scenery will have a positive effect on Graff and a slick gallop at the Gold Coast on Tuesday morning has boosted the trainer’s confidence.

“He’s been up in Queensland for a little while now,” Lees said.

“He produced a really good gallop on Tuesday and he’s got a soft draw so there’s a few positive factors there.

“You can’t be over confident with him but at his best he’s certainly capable of doing it.”

“Graff is a bit enigmatic.”

“He’s hard to get a strong line on. He’s a long time out of the winner’s stall.”

Lees has also taken the blinkers off Graff who will jump from gate two in the eighteen horse Stradbroke Handicap field with Sean Cormack in the saddle.

Lees will also saddle up English import Chief Ironside who will race with the blinkers on for the first time and will jump from barrier ten with Corey Bayliss aboard.

“I was really pleased with his Scone Cup run,” Lees said.

“He was attacked mid-race and left a sitting duck late and just getting run down with his big weight.

“He’s come out of it really well and we’ve decided to add blinkers to his gear because he’s coming back in trip.

“I think he is a sneaky chance with luck in running.”

The Gai Waterhouse and Adrian Bott trained Dawn Passage remains at the top of the Stradbroke Handicap betting at Ladbrokes.com.au at $5 ahead of last year’s winner Trekking and the Victory Stakes winner Victorem who share the second line of betting at $8.

The post Lees has some positives for 2020 Stradbroke Handicap outsider Graff appeared first on HorseRacing.com.au.