Dawn Passage remains the favourite for the 2020 Stradbroke Handicap despite drawing the extreme outside barrier in the $350,000 Group 1 sprint over 1400m at Eagle Farm on Saturday. 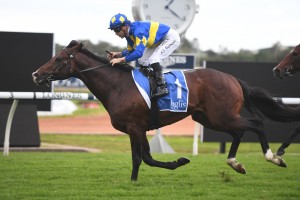 Dawn Passage, above, is the favourite for the 2020 Stradbroke Handicap at Eagle Farm. Photo by Steve Hart.

The Bookies at Ladbrokes.com.au have Dawn Passage at the top of the betting at $4.60, a clear margin over the $7 second pick Trekking who was also handed the visitor’s draw.

The Gai Waterhouse and Adrian Bott trained three year old drew barrier 23 in the original draw but will move in five spaces and jump from the outside gate when the 18 horse field is finalized on Saturday morning.

The wide barrier will be offset by Dawn Passage’s light weight with the colt only having to carry 50kg with James Innes Jnr taking the ride.

Dawn Passage secured his spot in the Stradbroke Handicap field when he became exempt from the ballot with his win in the Group 3 $125,000 Fred Best Classic (1350m) at Doomben last Saturday and co-trainer Adrian Bott said the stable wasn’t concerned about the seven day back up.

“I think it will really suit him,” Bott told AAP.

“We went up there knowing he would have to run on Saturday, and he has been in Brisbane early to give him plenty of time.

“He will have a nice easy week and this hit-out will have done him the world of good.”

Last year’s Stradbroke Handicap winner Trekking’s job was made a bit tougher to score back to back wins in the Queensland Winter Carnival’s premier race when he was handed the visitor’s barrier and will jump from gate seventeen, one inside of Dawn Passage.

Michael Cahill takes the ride on the James Cummings trained sprinter and Godolphin’s Australian Managing Director Vin Cox said that the wide gate does pose a problem for the topweight .

“Trekking is one of the elite sprinters in the country, no question. Take the barrier aside, we would be very confident,” Cox told The Courier-Mail.

Cummings will also saddle up Kementari (barrier 10), Rainer (barrier 19) and the three year old filly Exhilarates who has drawn nicely at barrier four and only has 49.5kg on her back. in the Stradbroke Handicap.

“On the seven-day back-up like she did in the Magic Millions, it’s not a bad formula.”