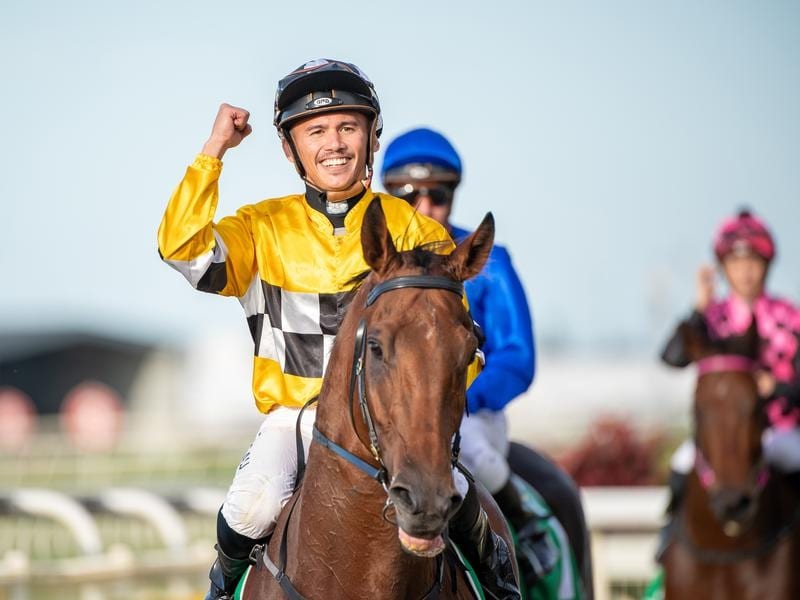 Tambo’s Mate has earned a Stradbroke Handicap start after winning the BRC Sprint at Doomben.

Stuart Kendrick’s decision to take a gamble with Tambo’s Mate completed a huge week for the trainer when the gelding earned a start in the Group One Stradbroke Handicap.

Kendrick trained his 900th career winner on Wednesday and had a Gold Coast metropolitan winner on Friday.

He also completed a deal to sell his ATC Australian Derby placegetter Eric The Eel to Hong Kong.

Kendrick had been debating whether to run Tambo’s Mate in the Group Three BRC Sprint (1200m) at Doomben on Saturday or the Listed Chief De Beers at the Sunshine Coast next Friday.

After a lengthy discussion with the gelding’s owners it was decided to run in the BRC Sprint which carried ballot-free entry to the Stradbroke on June 6.

It proved the correct decision when Tambo’s Mate ($12) scored by a short head to Deep Image ($14).

“We figured if he couldn’t run well on Saturday he wouldn’t be any chance in the Stradbroke,” Kendrick said.

“But he is in the Stradbroke field now and we know he can handle Eagle Farm.

“The Stradbroke will be tougher but Tambo’s Mate is tough so we can have some fun.”

Kendrick said he would now decide on a Stradbroke lead-up race but the Group Two Victory Stakes on May 23 was an obvious choice.

Jockey Matt McGillivray took the feature double for the day as he had earlier won the Listed Doomben Guineas on Vanna Girl.

Deep Image is also headed to the Stradbroke Handicap after a strong effort where he looked the winner at the 200m.

The Tony Gollan-trained pair Outback Barbie ($3.80) and Vega One ($6) finished third and fourth and did their Stradbroke claims no harm.

Godolphin’s gelding Kementari ($3.70) was another to cement his Stradbroke claims, finishing fifth after being slow to jump and travelling deep for much of the race.