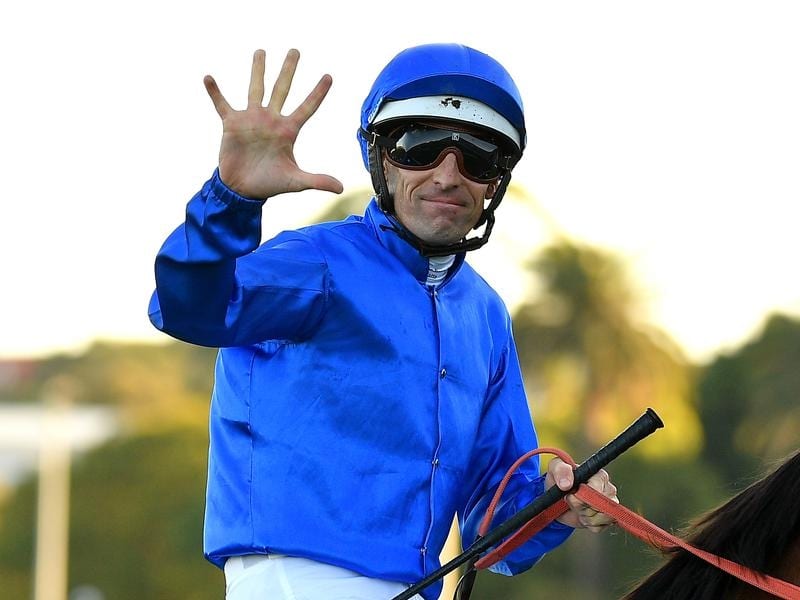 Hugh Bowman has dominated racing at Randwick with five winners on the Kensington track.

Hugh Bowman headed to Randwick with an unflattering opinion of the Kensington circuit but surely emerged with a fresh view following a brilliant five-winner haul.

The top jockey was almost unstoppable, opening his account in the second race aboard Yonkers and followed with wins on Dirty Work, Rocha Clock, Hightail and Phaistos, all for different trainers.

He just failed to make it six when going down narrowly aboard Juventus in the final race.

Bowman said there was no magical formula behind his red-letter day, just a book of quality rides and good fortune in the blustery conditions.

“I couldn’t stand the joint before today,” Bowman said.

“I think the wind is playing a big part and it’s making it hard for those forward runners to sustain their speed.

“I’ve had the wide draws, I’ve had horses that get back and get home and they’re all good rides.

“There is no magic about what I’m doing, I’ve just had the right horses with conditions to suit.”

Among Bowman’s highlights was a victory aboard the Peter and Paul Snowden-trained Hightail in the Quincy Seltzer Handicap (1200m).

Allowed to find his feet early, the colt was flushed out before the home turn but his class shone through as he dug deep to fend off Trumble by a short neck with another head to Hilo, who was wide throughout.

Bowman said it did not rate as his best ride but Hightail was good enough to score regardless.

“If I had been a bit more patient he would have won with a bit of authority,” Bowman said.

“He will definitely improve on it.”

Co-trainer Peter Snowden confirmed Hightail would head to Brisbane for a series of stakes races, possibly taking in the Stradbroke Handicap.

“We deliberately missed the autumn carnival with him so he would be right for the Brisbane winter,” Snowden said.

“I actually think we could freshen him up and go for the Ramornie Handicap at Grafton – I think that’s a great race for him.”

While Bowman was critical of his performance on Hightail, Snowden saw it differently.

“I thought Hugh made the winning move at the half-mile following Hilo,” Snowden said.

Bowman headed into the final race aboard Juventus with a rare six-timer in sight, his young family gathering outside the racecourse fence to cheer him on.

They would have thought he had clinched it when Juventus loomed ominously but the favourite was unable to get past Glen Boss on Wild About Her.

And Boss had a few cheeky words for his good friend as they went across the line, revealing his parting quip to Bowman.

“How does it feel to run second?” Boss said.