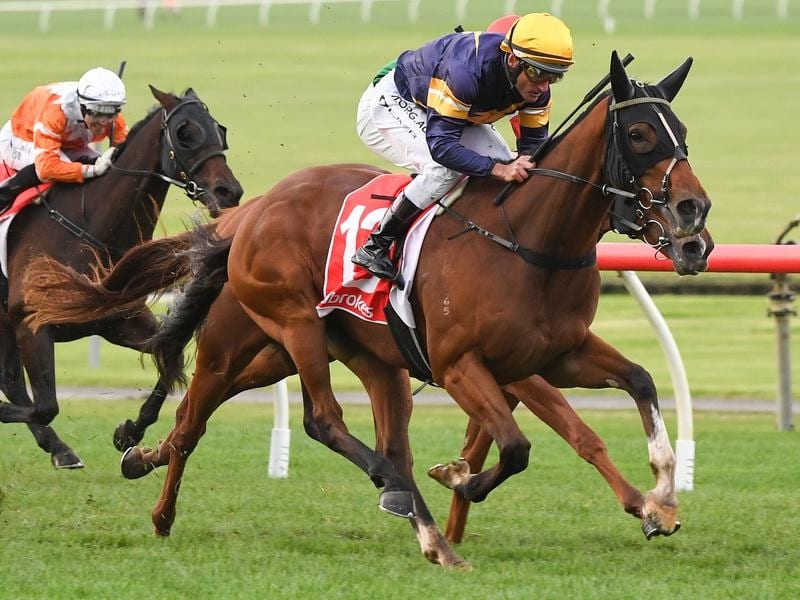 Import Buffalo River has made it five wins from six Australian starts in scoring at Sandown.

Imported galloper Buffalo River has graduated to open company with a strong on-pace victory at Sandown.

The Mike Moroney-trained four-year-old has now won five of his six starts in Australia following his win in the Ladbrokes Money Back Odds Handicap (1400m) on Saturday.

Sent off the $1.90 favourite under Damien Oliver, Buffalo River did not let his supporters down in scoring by three-quarters of a length from Achernar Star ($21) with Harbour Views ($18) a further 2-3/4 lengths away third.

The victory provided Oliver a double after winning aboard Final Man in the Salute Frontline Workers Handicap.

Oliver said Buffalo River was still developing and was looking forward to the future with the US-bred galloper, having ridden him in four of his five victories.

Buffalo River commenced his Australian campaign at Ballarat just shy of 12 months ago and the only time he has been beaten was in the Silver Eagle at Rosehill last spring.

“He’s acclimatising well and he’s got a summer coat on him,” Oliver said.

“I was a bit surprised by the leader, but the horse is maturing and he’s adapting better to different circumstances whereas last preparation he probably wasn’t.”

Jack Turnbull, representing Moroney, said he was unsure of the immediate future for Buffalo River.

The gelding shortened from $15 to share the top line of betting at $11 in the Stradbroke Handicap at Eagle Farm in June.

The Stradbroke is one of only two Group One races that will be run in Brisbane this year because of a restructure of the winter carnival.

“We haven’t said no (to the Stradbroke), but there’s no exact plans,” Turnbull said.

“We’re just taking it race-by-race which was always the initial plan.”