Music Event was having his third start when he lined up in heat four of the $10,000 to-the-winner Gold Rush, having been beaten at short odds in two starts at Bathurst back in March, when trained by owner/breeder Steve Jones.

“He was only 16-months-old when he had those two starts in NSW so he was immature and that’s how he raced. I wasn’t worried that he got beaten because I was getting him!

“When they sent him down they also thought the tracks were better down here (Victoria).”

A November ’18 son of Lochinvar Marlow, Music Event was $3 favourite from box three at his Victorian debut in the fourth of five Gold Rush qualifiers, with a buoyant Carter later saying he was well over the odds.

Music Event began sweetly and after burning off Weblec Whirl he exploded away from his rivals, trouncing runner-up Weblec Whirl by 6.5 lengths in a scintillating 23.62s, comfortably the fastest heat performance.

“My comment was that they would have to break 23.70s to beat him,” said Carter.

“He’d been going enormous and been hidden for two months. I got $3.50 instead of $2 and he was unbeatable!

“Nobody pays my wages except me and my dogs so it was a good result.

“I actually wasn’t far off starting him when this race popped up and I thought we could wait another month. He needed a little bit more field experience to do what he did last night.”

Music Event will have to overcome box four in Friday’s Final with Carter aiming to go one better than last year when his $2.80 favourite Extra Speed was edged out.

“Last year in the heats I thought Extra Speed couldn’t be led but she blew the start so I got good money in the semis and she was the fastest qualifier,” Carter said.

“As long as Music Event jumps and splits like he did last night they’ll know he’s there!

“He’s only 18 months and he’d been held back a little bit and was on the fresh side so he’s still on the way up.”

Massina is now hoping Lalina can emulate her mother, Nallak, which won the Gold Rush in 2016, with Massina also preparing runner-up Bakali.

The $10,000 to-the-winner Gold Rush Maiden Final will be held on Friday. 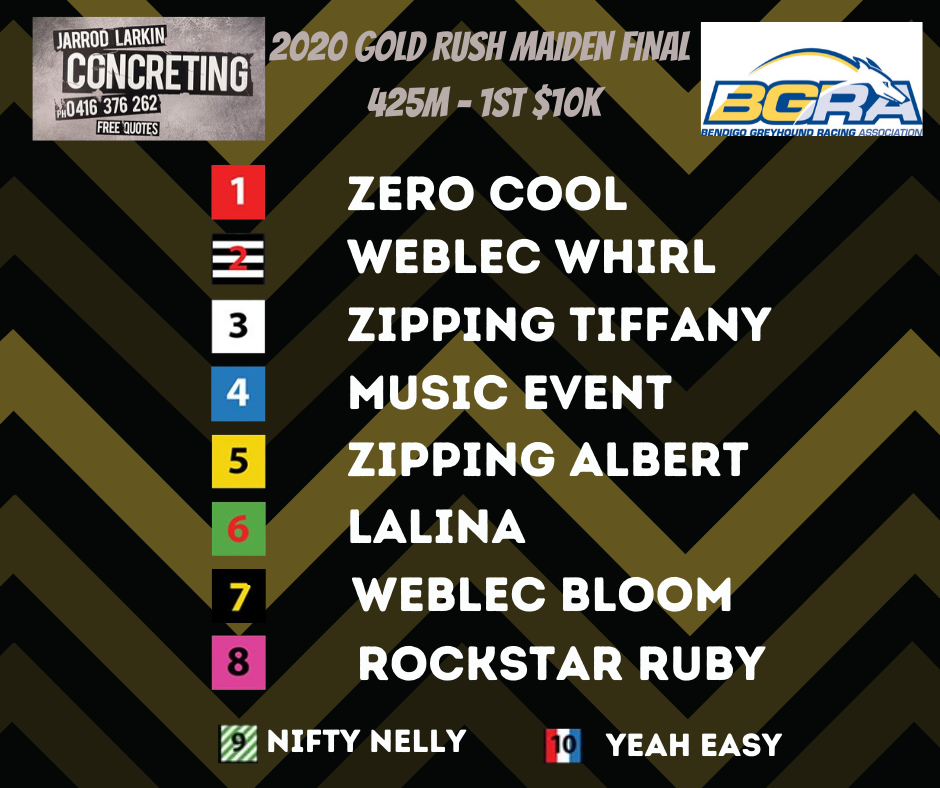