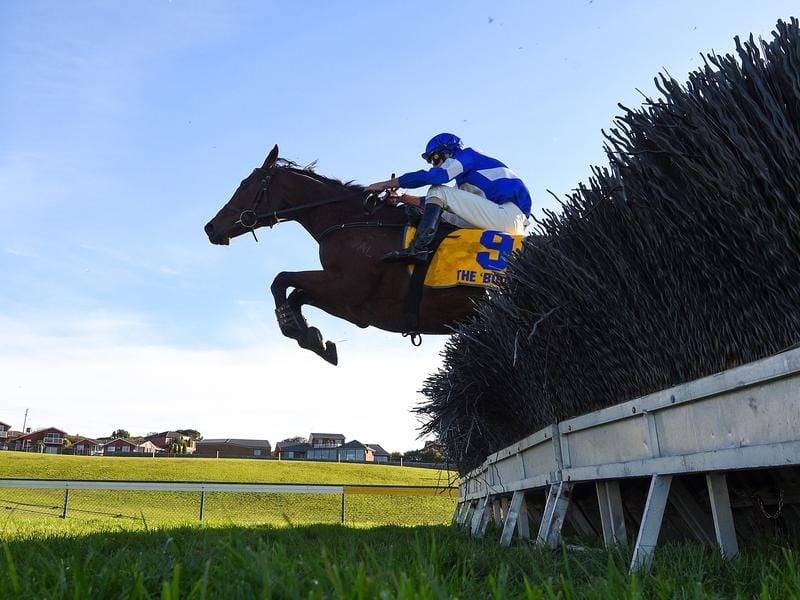 Jockey Clayton Douglas has ridden Getting Leggie to win the Brierly Steeplechase at Warrnambool.

Getting Leggie has relished a return to jumps racing at Warrnambool taking out an incident-packed Brierly Steeplechase to post his third win at the track.

An awkward leap at the second fence in Tuesday’s mini-feature by Zataglio dislodged his rider Bill Gleeson which in turn brought down the Tommy Ryan-ridden He’s A Genius.

Both horses chased the field and Ryan walked back to the jockeys’ room while Gleeson was taken to hospital with a suspected leg fracture.

Getting Leggie won a maiden hurdle at Warrnambool in March 2018 before returning to win at the three-day May carnival three starts later.

The Nick Smart-trained jumper missed the 2019 carnival and the trainer set about setting Getting Leggie for the abbreviated carnival this year.

Smart was contemplating running the gelding in the Grand Annual Steeplechase before a late switch to the Brierly.

Giving Clayton Douglas the second leg of a race-to-race double after his win on Georgethefifth, Getting Leggie ($14) scored by 1-1/4 lengths from Lucques ($19) with I’ll’ava’alf ($14) a half-length away third.

“This wasn’t his race. We were going for the Grand Annual but I thought we’d hit a wet track so came back to this race,” Smart said.

Douglas said Smart gave him confidence before the race saying Getting Leggie needed the outing when a last-start second at Pakenham.

He added there was some concern mid-race with the riderless Zataglio in amongst the field at certain stages.

“I was hoping that those horses would move out of the way,” Douglas said.

“My bloke was lucky enough to get out of the way and he was in the right spot at the right time.

“He switched off nicely just beyond the speed and they rolled along as in the Brierly they’re not going to go slowly.

“He jumped well, I was really happy with him.

“I’d like to thank Nick for putting me on. He’s been a pretty good supporter of mine so it was good to get a win for him.”