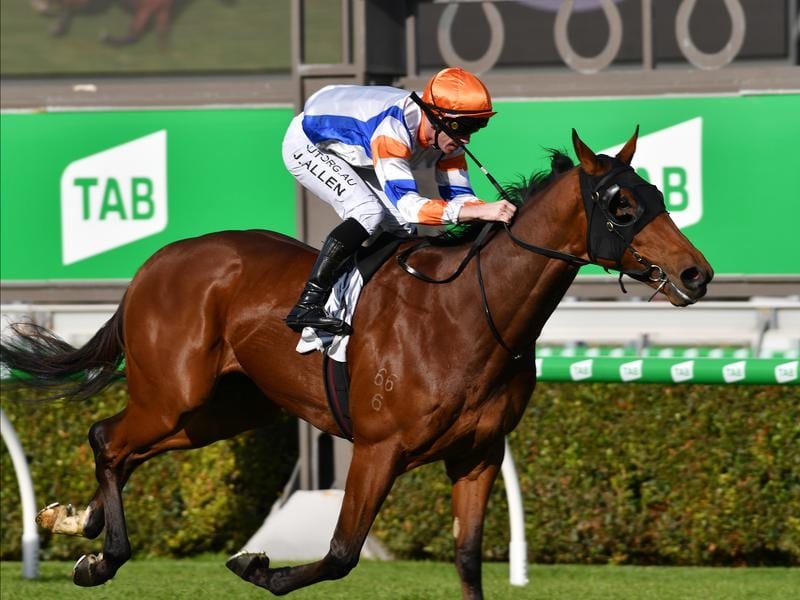 John Allen is making a habit of winning the Adelaide Guineas at Morphettville.

The Victorian-based jockey won the Listed 1600m race for three-year-olds for the third -straight time on Saturday, steering Game Keeper to an impressive victory.

“It definitely has been good to me and I got on the right horse again this year,” Allen said.

Trained by Tony and Calvin McEvoy, Game Keeper ($5.50) went into Saturday’s race off two wins this campaign in lesser grade and the gelding was able to take another step up, sprinting down the outside from back in the field to score by three lengths.

Hypercane ($17) ran on for second with Quantum Mechanic ($13) another short-neck away third.

“His last couple of runs have been good wins and just watching the replays in his last win he was really strong through the line.

“He travelled well in the run but when I pulled him out he really did pick up for me and accelerate.”

Allen and the McEvoys had earlier combined for another stakes win on the program with Ringbolt taking out the Group Three SA Sires’ Produce Stakes.

Tony McEvoy said the owners of Game Keeper had been very patient with the three-year-old who was tested in Group One company as a two-year-old when finishing last in the Blue Diamond Stakes.

His three wins from as many starts this campaign have taken his record to four victories from nine starts and McEvoy believes he’s starting to fulfil his potential.

“He’s been a talented horse so he’s been a source of frustration for us,” McEvoy said.

“We’ve had to geld him and he’s now come back and is starting to really hit his straps.

“He was super impressive today.”

McEvoy said he could back the three-year-old up against older horses next Saturday in the Group Three RA Lee Stakes (1600m) before looking to spring.