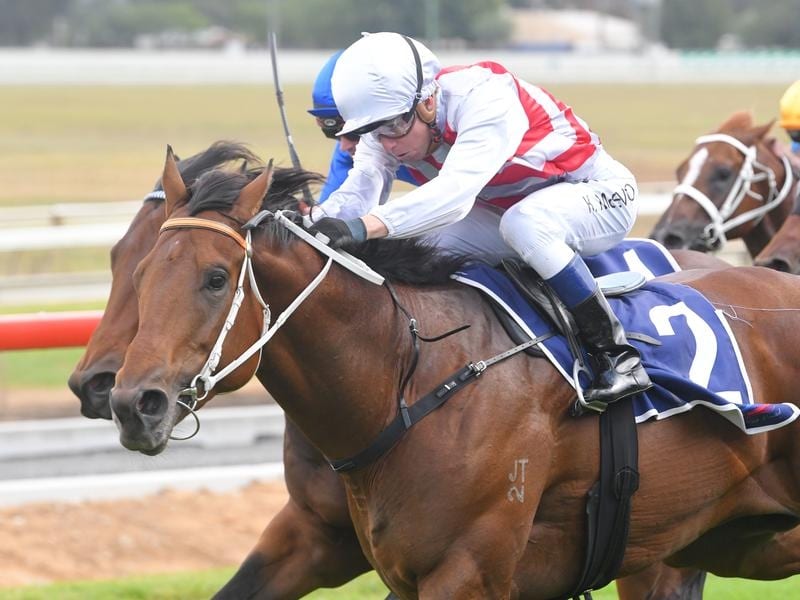 Graff could still head to Qld and the Stradbroke Handicap if he performs well at Rosehill.

The annual stand-alone meeting at Hawkesbury, being held at Rosehill this year because of coronavirus restrictions, has attracted quality fields, a trend trainer Kris Lees expects to continue into the winter.

Lees has several leading chances on the eight-race card, headed by dual Group One winner In her Time in the Hawkesbury Crown, and says the reduced carnival in Brisbane, combined with tough travel logistics, will keep many more horses in Sydney.

“I don’t think you’ll have the influx of horses going to Brisbane that you normally have so I think the field sizes will hold some strength and these races on Saturday are a good indication of that,” Lees said.

“A lot of horses would be up there for other races.

“It’s not easy to get them there to Queensland to race so you’d probably only go with very much the right horses I would suggest.”

Among those Lees still has in line for an interstate trip is Graff, who resumes in Saturday’s Listed Hawkesbury Gold Rush (1100m).

Formerly raced by Alan Bell, Graff has been bought by syndicators Australian Bloodstock and will have his first start for his new owners who include Aquis Farm.

While the four-year-old has not won since the 2018 San Domenico Stakes, he has been competitive at the top level finishing close fourths in last year’s Group One Lightning Stakes and Newmarket Handicap at Flemington.

First up last campaign he was third behind Redzel and Pierata, beaten a length, and if he can recapture that form Lees has not ruled out taking him to Queensland for the Group One Stradbroke Handicap in June.

“If he can reproduce that first up run it puts him in good stead here,” Lees said.

“He can get to a Stradbroke if his form warrants it but the Scone carnival, which is now in Sydney, there are a couple of races there that would suit.”

Graff will be one of three Gold Rush runners for Lees along with Tactical Advantage and the resuming Agent Pippa.

Tactical Advantage and Graff were scratched from last weekend’s Hall Mark Stakes after drawing off the track and each has fared better with barriers one and four respectively.

“It normally doesn’t happen that way but it has worked out OK at this stage, we will see what happens in the run,” Lees said.

Tactical Advantage has been unplaced in two autumn starts on rain-affected tracks, the most recent a fourth to Vegadaze in the Star Kingdom Stakes.

Lees says the horse will appreciate firmer footing, while Agent Pippa has a good fresh record but faces a class test.

“Tactical’s two runs have been on ground that he doesn’t prefer so I could see him really turning his form around,” Lees said.

“Agent Pippa is very capable first up. It’s just whether she’s got the class of some of these, but she is a good mare for the winter.”