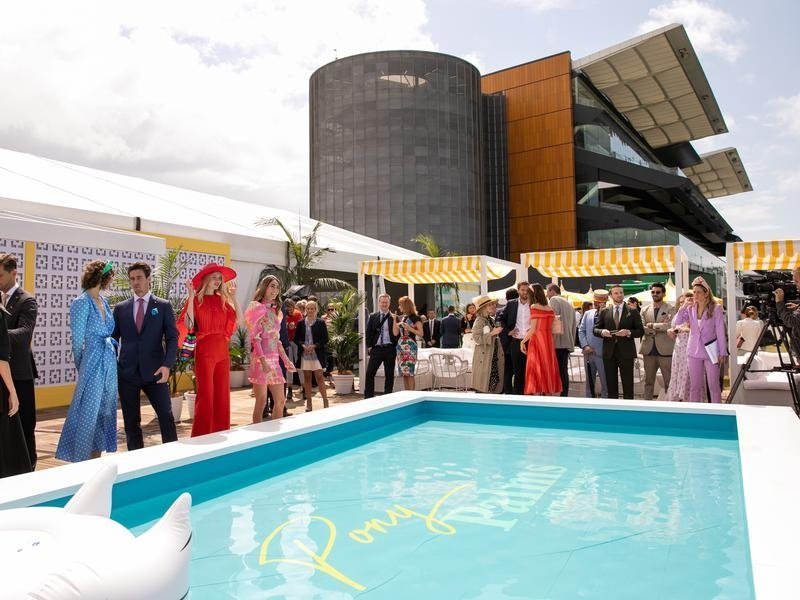 The new Pony Palms precinct at Randwick for the Everest Carnival has been unveiled.

Horse racing glitz and glamour was on show at Royal Randwick’s newest precinct, Pony Palms, where the world’s richest turf race The Everest has been launched in Sydney.

The Palm Springs-inspired area featuring a trackside pool surrounded by cabanas and umbrellas will be opened to racegoers on Saturday, with ambassador Sarah Roberts to play a live DJ set.

“I’ve been DJing for about eight years now I’ve been doing it in conjunction with my acting and they go really well together,” Ms Roberts told AAP.

“I particularly love the entertainment part of race day.”

The Home and Away star has a special place in her heart for the Everest, where fellow ambassador and Home and Away co-star James Stewart first asked her for a drink.

“The races is where I plucked up the courage to say would you like some free Chandon,” Mr Stewart told AAP.

“Then I asked her to marry me and here we are.”

The rugby enthusiast said the races reminded him of a grand final, adrenaline pumping and constant cause for celebration. He also enjoys attending a sporting event both he and Ms Roberts can get behind.

“I love my rugby, I love my cricket, Sarah not so much, race carnivals are something we both love, we both love getting dressed up and we both love trying to pick a winner.”

“Racing’s been around for such a long time and it makes people happy seeing good horses, they are beautiful animals,” Ms Mallyon told AAP.

“The jockeys and the trainers and the people who put their heart and soul into the sport to see them have success is what it’s all about, and then of course the fashion, there’s really something for everyone.”

Twinkling on display the Everest trophy adorned in 7777 black diamonds and worth $437,000 has been designed by jeweller Nic Cerrone.

More than $40 million will be won in prize money over the seven-week Everest Carnival, now in its third year, which includes the $14 million The Everest on October 19, and the new $7.5 million Golden Eagle on November 2.

The carnival kicks off this Saturday with the Group One Colgate Optic White Stakes at Randwick.