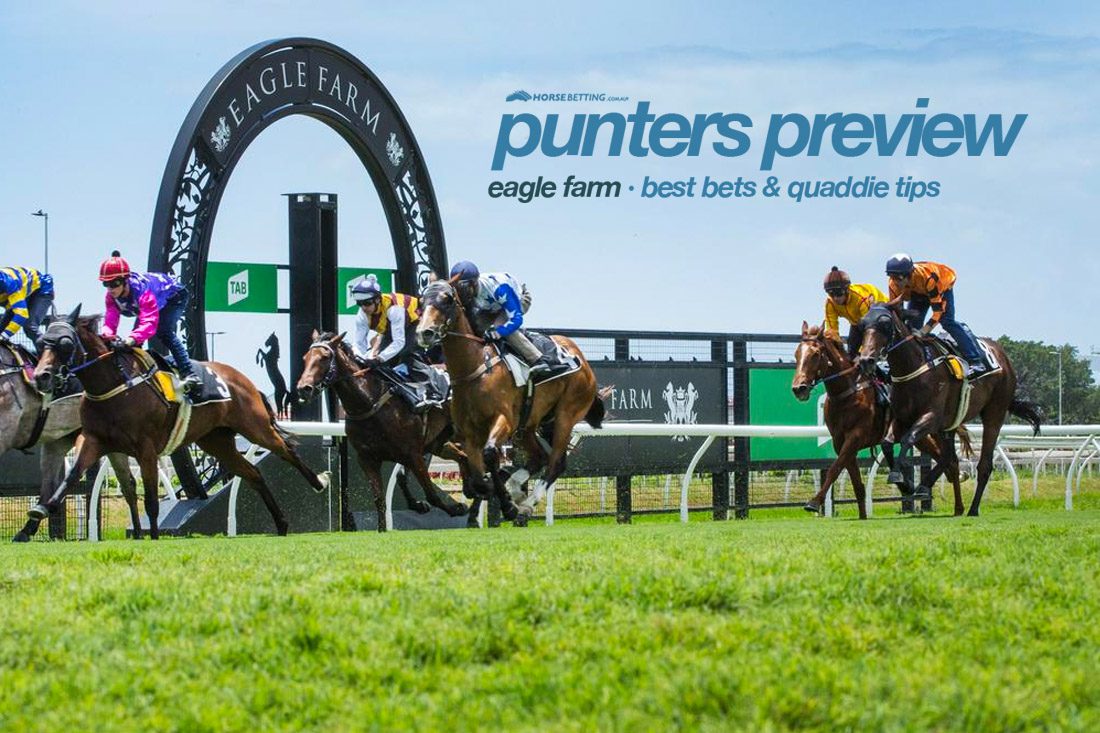 In what is set to be the last meeting at Eagle Farm before a 12-week break over summer, HorseBetting’s Queensland form analyst brings you his race-by-race preview, best bets and quaddie numbers for Bribie Handicap Day. The track is rated a Good 4, and although there is rain forecast in Brisbane, the Eagle Farm track drains well and should be dry come Saturday. The rail is back in the true position for the entire course, so we should be in for a fair day’s racing. The field for the opener is set to face the starter at 12:38pm AEST.

In the first race of the afternoon, a field of nine horses is set to contest a Benchmark 80 over 1600m. On the seven-day backup is Olivia Cairns’ Ammoudi Bay after he ran a game fifth in last Saturday’s Country Cups Challenge Final over the mile at Doomben. The former Victorian was the original favourite for that race but drifted heavily in the market, no doubt due to the wide barrier. Despite settling with only two horses behind him, he made up considerable ground in the straight to be beaten just over three lengths. Justin Stanley stays on, he faces a smaller field and he should relish the hard track that is Eagle Farm. Couldn’t Refuse and So Taken are the two dangers, while Smart Meteor tends to race well here.

The three-year-olds do battle in the second race of the day in a bid to win some QTIS money. Matt Dunn and Jim Byrne combine with the toppie in Artero, who has won two of his five starts, while his three losses came in some decent races, including one at Listed level in Sydney behind Mazu in October. That form is good enough to get us quite keen on the son of Flying Artie’s chances here. The colt tends to settle out the back in his races, so the outside alley in this field of eight will see him stay out of trouble, while the last time he was at 1400m was when he won in a last-to-first victory at Wyong two starts back in a Class 1 against the older horses. It’s an open race and he has to concede weight to all of his rivals, but we’re confident Artero has their measure.

The third race of the day is for the two-year-old colts and geldings as they head towards the Magic Millions 2YO Classic at the Gold Coast, and we look to have a pretty smart one going around. Palazzo Spirit lines up as the race favourite, and he is also on the sixth line of betting for the aforementioned January feature at $17 with online bookmakers. The Steven O’Dea & Matt Hoysted-trained son of Spirit Of Boom won on debut in what remains his only start to date at this track and distance. Baylee Nothdurft will keep the ride, which is a big plus as he has done everything with this colt so far in his career. Barrier seven will give Nothdurft a few options; however, he did lead all of the way on debut, so we expect to see him go forward again. Jason Deamer brings north Hard To Say after running sixth at Rosehill on November 27, but he had a torrid run in transit and so should relish getting a soft run from barrier two.

This race is the fillies’ edition for the two-year-olds as they also head towards the Magic Millions in five weeks’ time. There are a few in this race who are yet to taste defeat, one of which is Kevin Hansen’s Heroic Angel. The daughter of Heroic Valour has only had one start, which was a dominant win at Townsville over 1000m in the Pallarenda Stakes on October 23. Trained and owned by the same people as Sweet Dolly, the winner of this race 12 months ago, it seems to be a race they have once again targeted. Justin Stanley is likely to take her out the back again from barrier 14, but she has a serious motor, so the $26 seems overs.

The shortest-priced favourite of the day comes up in race five with Desleigh Forster’s Apache Chase going around at odds of $1.35. The four-year-old won his way into the Group 1 Stradbroke Handicap earlier in the year with a win in the Fred Best Classic seven days prior to the 1400m feature, but connections are hoping to secure a start in that same race again a bit earlier this time around, with the winner of The Gateway earning exemption from the 2022 Stradbroke ballot. This horse is arguably the best when it comes to a 1400m race at Eagle Farm, having had six starts at the track and distance for five wins. He will dictate terms from in front and should be just about impossible to run down.

A pretty competitive mares’ race will open the Eagle Farm quaddie legs on Saturday. We do love Expat’s racing pattern and she won very well first-up at Rosehill, but first time at Eagle Farm could bring a known wet-tracker undone, so we are going to go around her and side with the ever-consistent Eloquently. The Steve Tregea-trained mare has had 11 starts for six wins and three runner-up performances, including a narrow second to Miami Fleiss on December 4 across the road at Doomben in the Listed Eureka Classic. This four-year-old is a winner at Eagle Farm and will relish getting onto a dry track for the first time this preparation, now third-up. Anthony Allen is the regular rider and has once again been given the keys, which is a big plus. The outside alley is a slight query, but there is so much speed in this that she should be able to slot in just behind the leading bunch and pounce late.

A number of fast horses step out in the Bribie Handicap over 1000m, namely Usmanov, Shooting For Gold and Totally Charmed, but the chances and speed don’t end there. Totally Charmed finished off very well behind Zoustyle first-up in the Swiss Ace Plate, with that runner going on to win in Group 3 company last Saturday. The seven-year-old typically saves his best runs for first-up, but he also has a very handy second-up record with two wins from five attempts. While the son of I Am Invincible has never won at Eagle Farm, he’s never been out of the minor money either, so he clearly handles the track. He should get a great run in transit from barrier three, just stalking the leaders before letting down with his quick finishing burst.

The last time that we saw Garibaldi in a Class 6 over 1200m at Eagle Farm was back on May 1 when he finished a gut-wrenching second (for those who were on him) to Fender in the final race of the day. Since then, the Tony Gollan-trained five-year-old has finished fourth in a Group 3 and midfield in two Listed races. First-up in the Swiss Ace behind Zoustyle and Totally Charmed, the son of I Am Invincible drifted significantly in the market from $4 out to $14 and his winning chances were gone very early after bundling the start. Out to 1200m will suit Garibaldi, while Ryan Maloney in the saddle is a big advantage.

The final race on the program is a dead-set lottery. Find a dartboard, a dart and a blindfold and have a throw! In a race where we have very little confidence, we’ve gone fairly wide with Matt Dunn’s Beau Arrow. The eight-year-old caught the eye when fresh at Ipswich finishing off well from the back to grab third behind Amirykal and Clairvue Star. The son of Love Conquers All hasn’t really fired a shot in five starts at Eagle Farm, nor has he won beyond 1200m, but his first-up run at 1200m suggested he will appreciate the 1300m. He gets in this with the minimum weight of 54kg and the big straight should suit him, while Larry Cassidy stays on. Barrier 17 is a nightmare draw for connections, but the race is a nightmare to line the form up.