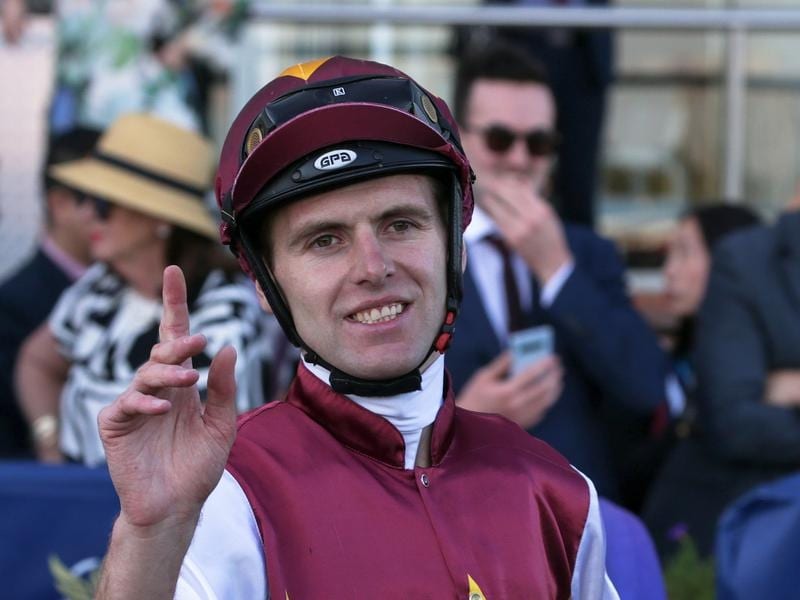 Dual purpose jockey Clayton Douglas has been attending the Warrnambool May carnival for as long as he can remember.

His father Vic trained three winners of the Grand Annual Steeplechase (Hoki 1995-96, Miracle Star 2000) while Clayton’s first ride in the 5500m marathon resulted in victory aboard the Symon Wilde-trained Gold Medals in 2018.

They ran second to Zed Em last year and return for another attempt at the feature race on Tuesday’s all-jumps card.

Douglas, who successfully mixes flat racing with riding over the jumps, says it will be a strange experience walking onto the course on Tuesday.

The Grand Annual, run on the third and final day in past years, attracts a large crowd but this year’s carnival has been cut to two days with the public locked out because of coronavirus restrictions.

“Before the Grand Annual you’re shoulder to shoulder with people, talking to the trainer, everyone is trying to get around the mounting yard and have a look at the horses,” Douglas said.

“The atmosphere is amazing so we’ll definitely feel it this year under the current circumstances, but at least racing is still going forward and we’ve got these good races on.”

Gold Medals is one of Douglas’ favourite horses and the jockey schooled him at Warrnambool last week in preparation for Tuesday’s race.

It was the first time Douglas had been on Gold Medals since a flat race at Sandown last July.

The shortened carnival has forced the Brierly Steeplechase, usually run two days before the Grand Annual, onto Tuesday’s program.

Wilde has used the Brierly as a lead-up for Gold Medals in the past but Douglas said the trainer has the horse going as well as ever.

“Even last year Symon was just going to run him in the Annual,” Douglas said.

“He’s done a lot of ground work and in his trial he was strong through the line and jumped well.

“While he has to go almost double the trip, I was very happy with him.

“I know he’s not one of the fastest horses, but he means so much for myself, Symon and all the team at Warrnambool.

“He won a two-year-old race during the carnival and the longevity that Symon has got out of him is unbelievable.

“I was pretty blessed to jump on him the first time and he is probably one of my favourite horses that I have ridden, for sure.”

Douglas has seven rides on Tuesday before switching to flat mode on Wednesday for six rides including Tahitian Dancer in the Wangoom Handicap (1200m) and Super Girl in the Warrnambool Cup (2350m).