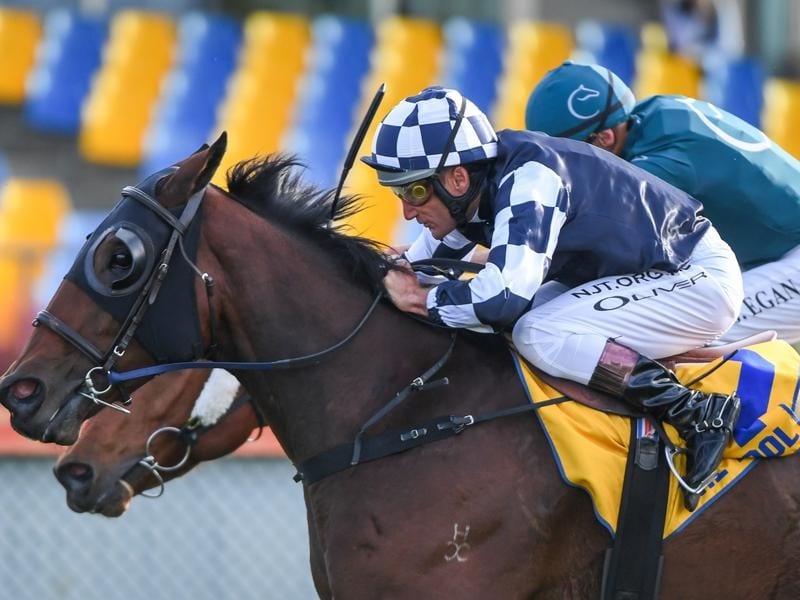 Order Of Command continues to build on his stakes record, winning the Listed Wangoom Handicap.

Order Of Command has added another stakes victory to his record with a fighting win in the Wangoom Handicap at Warrnambool.

The Danny O’Brien-trained sprinter, under the urgings of Damien Oliver, fought back after being headed in the straight to claim Wednesday’s 1200m Listed race.

To add merit to the victory, while allowing for a rise in the minimum weight due to coronavirus, Order Of Command lumped 62kg to victory, 3.5kg more than Storm Lover (2001) and Second Effort (2013) as the the highest weight carriers in the past 20 years.

Oliver said the runner-up Superhard had got a neck advantage on Order Of Command in the straight.

“On the turn I knew I was going to be in the finish but when the second horse cruised up to me with a big pull in the weights, I was a little concerned,” Oliver said.

“But I was keeping a little in the locker and he hasn’t let us down too many times.

“He’s really genuine, a consistent horse and his record shows that.”

O’Brien has taken Order Of Command from a maiden victory at Geelong just shy of two years ago to a dual stakes winner and had planned Wednesday’s race after the gelding returned with a first-up win at Caulfield on April 11.

For O’Brien it was his first feature win at the Warrnambool carnival, this year reduced from three days to one all-jumps meeting and one flat program because of COVID-19.

“It’s just great to win a feature race at the carnival even though we’re not there,” O’Brien said.

“No one can be, but it takes nothing away from the win.

“We missed the autumn and had this race in mind and given his rating will go up we’ll have to look at maybe Group Two races for him.

“He’s been there before in the Salinger on Derby Day and he looks like he likes soft ground, too.”