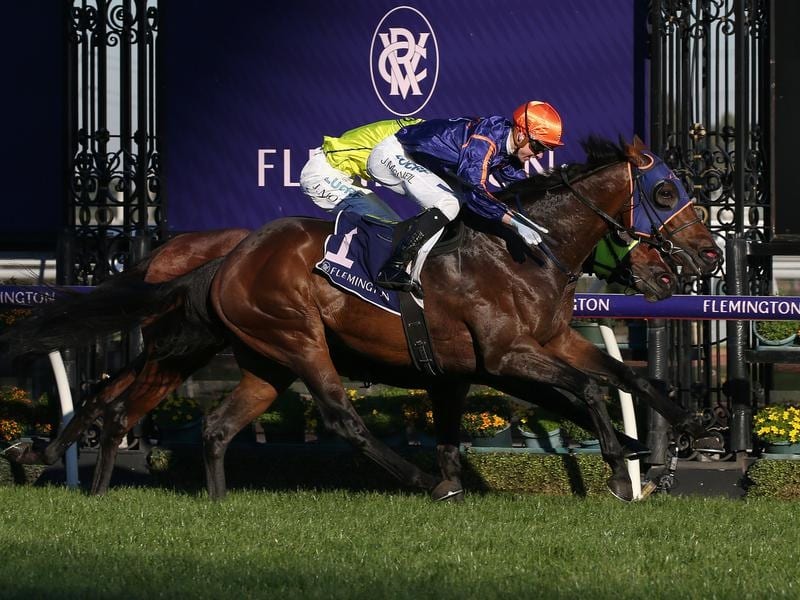 Trainer Matt Cumani has Declares War primed for the Gold Heath at Caulfield.

Trainer Matt Cumani is convinced Declares War is in the right shape ahead of a target race at Caulfield.

Declares War runs in Saturday’s Gold Heath (2000m) chasing a second win for Cumani and his first as a four-year-old.

After a long three-year-old season culminating in a trip north for the Queensland Derby last winter, Declares War has been given a slow build-up to Saturday’s $200,000 race, a target assignment since he resumed training over summer.

It will be Declares War’s fourth run this campaign and comes on top of a third at Mornington last month and a last-start second over 2100m at Sandown on April 8.

“He’s in great shape and I’ve been really happy with him in the last couple of weeks,” Cumani said.

“Early on we were a little bit open minded what may be his best trip.

“But he’s certainly run great races throughout the prep and now he looks like he would like a strongly run 2000 metres.”

Cumani is hopeful Declares War will not get as far back as he did at Sandown and if there is one negative it is the race is run at Caulfield.

“I’m happy with the barrier, happy with Jye (McNeil) on board and I’m hoping this can be his race,” Cumani said.

“But Caulfield is probably not his track. Flemington suits him much better, but the distance is right and he fits into the race.”

Mr Quickie won last year’s race before going on to run third in the South Australian Derby at Morphettville and then defeating subsequent Melbourne Cup winner Vow And Declare in the Queensland Derby at Eagle Farm.