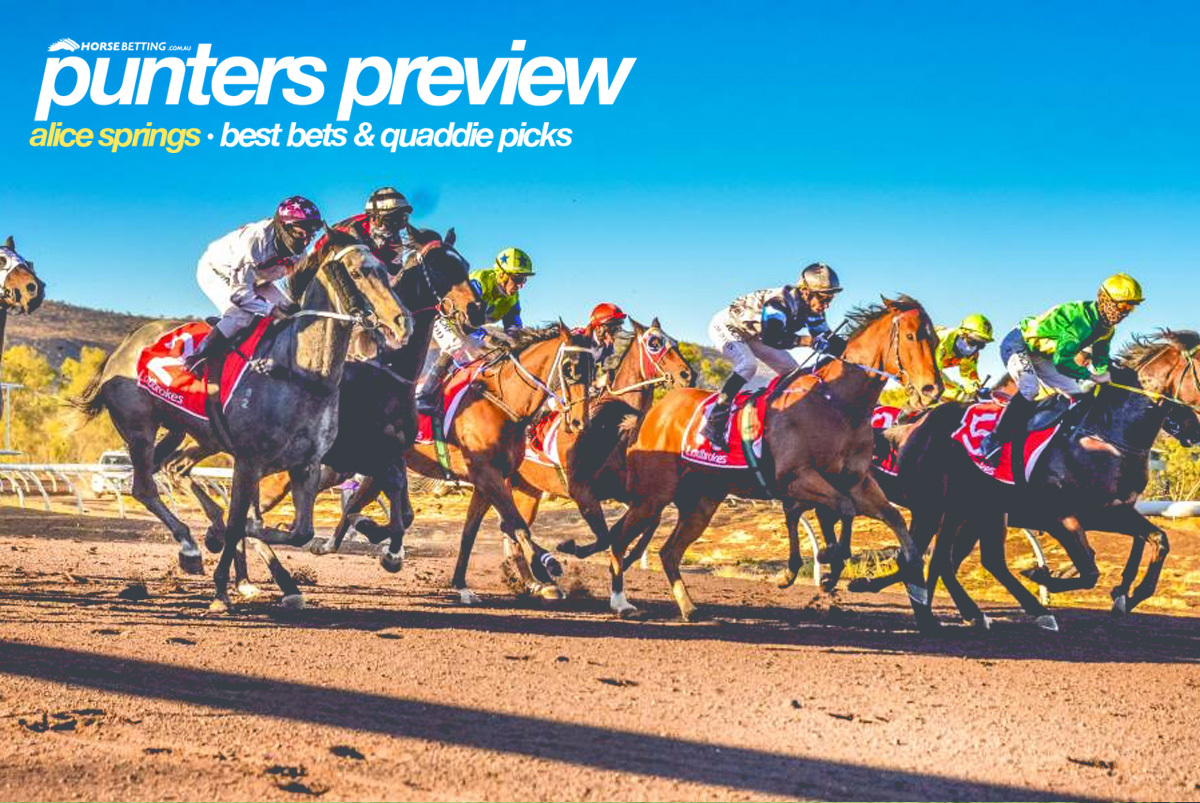 We are back in the Red Centre this Sunday for a six-race card out of Pioneer Park. See our race-by-race preview and best bets for Alice Springs.

Miles Prower has outstanding form at Pioneer Park and should he bring his best to the table will take a power of beating. Despite a last start fifth on May 1 – Alice Springs Cup Day – at 0-70 level over 1100m, the five-year-old gelding had 11 previous starts in the Red Centre for five wins, three seconds, two thirds and a fourth. Stablemate Radio Room (Jarrod Todd) also has a good record in the Alice, but hasn’t raced since December. Fantasy Eagle (Will Savage/Casey Hunter) brings healthy form from NSW, but was a last start 10th at Hawkesbury over 1600m on March 24. Maudy (Lisa Whittle/Paul Denton) has had 44 starts in Alice Springs for 12 wins and 14 minor placings, and cannot be overlooked despite a last start eighth.

Me Cabo has had 23 starts in Alice Springs and although he has only saluted on two occasions, the six-year-old gelding has finished second eight times. It has been 11 months since Me Cabo last won at Pioneer Park. After three runs in the Red Centre in April, the former Victorian galloper was a last start second at 0-70 level (1200m) at Tennant Creek on May 14. Envy Me (Lisa Whittle/Sonja Wiseman) finds it difficult to secure wins, but he rarely disappoints and is definitely in the mix. Butterfingers (Stan Tsaikos) and Policy (TBC) from the Terry Gillett yard, as well as Truckload Of Hoffa (Ursula Dobbe/Casey Hunter), Travanti (Kevin Lamprecht/Sairyn Fawke) and Marsalis (Carrol Hunter/Wayne Davis) can spring a big surprise.

Rhythmical, who debuted at Morphettville on Melbourne Cup Day in 2016, is still ticking over after 42 career starts and is capable of getting the cash after posting seven wins in 27 starts in the Alice. The eight-year-old gelding hasn’t been far away in his past seven runs despite not saluting since September last year. A last start fourth at 0-58 level (1200m) on April 29 had merit, but Debbonaire Boy (Ray Viney/Jessie Philpot) is only getting better since arriving in the Red Centre, Future Dreams (Terry Gillett/Stan Tsaikos) has the class, Kyd Rock (Jess Gleeson/Adam Nicholls) has a good record at Pioneer Park, and Saiken (Will Savage/Casey Hunter) finally tasted success last start in a 1000m maiden at Tennant Creek on May 14.

Redenzo Lad has performed admirably of late and looked set to get that elusive win at the 13th attempt before falling to stablemate Saiken by the bearest of margins in the 1000m maiden at the Tennant Creek Cup meeting. The four-year-old gelding was a $1.60 favourite that day, so even the bookies know that first win is imminent. Tycoons Dior (Rene Taylor/Paul Denton) has had three starts in the Alice and hasn’t been that far away, so she is bona fide chance. Iamelle (Russell Bell/Wayne Davis) has suddenly found her mojo, while three recent arrivals to Central Australia namely Ananagram (Lisa Whittle/Sonja Wiseman), Toguchi (Kevin Lamprecht/Sairyn Fawke) and Above Everage (Jess Gleeson/Adam Nicholls) can strike.

Harpuna ($3.10 fav) held on to win last start against 0-58 opposition over 1000m on May 1 and is every chance to make it back to back wins. The five-year-old gelding landed in Alice Springs with a decent CV from South Australia and bounced back after a first up sixth at 0-62 level (1100m) on April 16. Harpuna is definitely the one to beat and should start the race as a commanding favourite, but Like A Heartbeat (Lisa Whittle/Sonja Wiseman), City Jet (Terry Gillett/Stan Tsaikos) and Defactor (Jess Gleesson/Jarrod Todd) showed signs during the Alice Springs Cup Carnival that they won’t lie down. South Australian arrival Salbris (Will Savage/Casey Hunter) can’t be treated lightly after a first up Tennant Creek win on May 14.

Our Luca arrived in the Alice from Darwin in February for a win over 1100m (0-76) before a second over 1100m in open company in March. Two wins over 1000m in open company and 0-76 level had the eight-year-old gelding primed before a sixth in the $30,000 “The Soldier” Lightning (1000m) on April 16. Our Luca, who has an outstanding 1000m record, rallied to finish third in the $100,000 Pioneer Sprint (1200m) on May 1. Devil’s Temptation (Jess Gleeson/Jarrod Todd), who won the Lightning, must be respected. Mathematics (Lisa Whittle/Paul Denton) is never far away despite not winning since February, while stablemate Cyclonite (Sonja Wiseman) is capable of winning a race like this. The Amazing Tahlia (Kevin Lamprecht/Sairyn Fawke) has good form and Roughly (Phil Cole/Wayne Davis) returns after 20 months.