English visitor Addeybb produced a repeat of his Group 1 Ranvet Stakes winning performance to outclass his rivals to win the 2020 Group 1 $2m Longines Queen Elizabeth Stakes (2000m) at Randwick on Day Two of The Championships today. 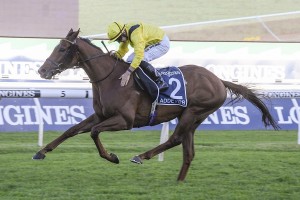 Addeybb, above, strides out to win the 2020 Queen Elizabeth Stakes at Randwick. Photo by Steve Hart.

Another top shelf ride from Tom Marquand saw the English jockey combine once again with Newmarket trainer William Haggas after they teamed up with Addeybb to win the Group 1 $700,000 Ranvet Stakes (2000m) at Rosehill on March 21.

He punters stuck with Addeybb and sent the English galloper out as the $4.20 favouite just ahead of the well credentialed Japan visitor Danon Premium at $4.40.

Marquand gave Addeybb the run of the race and had the favourite in the clear as heads were turned for home and he looked to have plenty of horse underneath him.

James McDonald was also moving forward on Danon Premium at the op of the straight and it looked like the two top fancies were going to fight out the finish, but under hard riding from Marquand, Addeybb proved to be the toughest on the day and went on to record a two and three quarter lengths win.

Danon Premium died on his run and ended up in third place after the Chris Waller trained Verry Elleegant ($5) passed him to run into second place.

Assistant trainer Harry Eustace has been looking after Addeybb in Sydney during his Autumn Carnival campaign and said that William Haggas had made long range plans to end the six year old to Australia.

“Since June last year, he (William Haggas) thought he was the right horse, getting a bit of soft ground at this time of year for the Championships, to pull it off, it’s just fantastic,” Eustace said.

“If we had more rain he would have won by further I’d say.”

Eustace said that he thought Addeybb would be hard to beat again today, but didn’t expect him to win in such an easy fashion.

“I didn’t think he would win by that far, it’s such a deep field and I thought it would be a rail nail biter to the finish, but when he kicked clear turning in, he ran all the way through the line in the Ranvet and he was going to do the same here today, it was an easy watch the last 50m, but we had a bit of a shout before then,” Eustace said.

“The biggest win I’ve been involved in, definitely.”