American mare Con Te Partiro has joined Appearance as the only two horses to accomplish the Coolmore Classic and Coolmore Legacy double.

Gai Waterhouse and Adrian Bott’s six-year-old mare won the Coolmore Classic three starts back under Tim Clark, but on Saturday, the pair ranked as one of the outsiders heading into Saturday’s Coolmore Legacy following a luckless run in the Doncaster Mile seven days earlier. 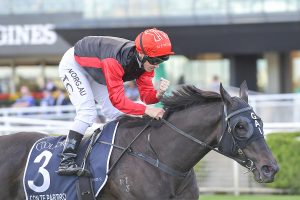 Ladbrokes listed Con Te Partiro as a $10.00 chance in their market, but with horses returning on the short backup proving profitable throughout the day, it wasn’t surprising to watch Clark put his foot down at the 300m for a comfortable win.

“It’s probably taken a bit of time to work her out but seem to have found the key to her now” Clark said after the race.

“She’s had a great preparation. She ran well last week but coming here on the back up wouldn’t hurt her and she is always the strongest horse late. I knew she would run into it strongly and really pleased with her.  “

The pace was set early by Amangiri who led at the home turn. Con Te Partiro settled into fourth out of the gates, but found plenty of running room down the middle of the track to take up the lead heading into the final furlong.

A late challenge from favourite filly Funstar loomed along the rails, but she didn’t have enough to catch the talented galloper. The win marked Con Te Partiro’s second Group 1 victory as well and the first for Waterhouse and Bott as a partnership.

“She’s just been a great frame of mind since she came back this time in, she’s been much better to deal with this campaign, she just needed that time to acclimatise,” Bott said.

“This was always the plan to come here off the back of the Doncaster, she had a nice week and it’s been executed well.”

Danzdanzdance was the other eye-catcher coming home strongly for third. The Group 1 winner in New Zealand was luckless in the Ranvet last start but did have form around Queen Elizabeth Stakes winner Addeyb and last weeks Doncaster winner Nettoyer.