After being bitten by the racing bug before he was a teen, Alf Spiteri is still going strong, recently training a double at Bendigo with his only two greyhounds. Today he celebrates his 80th birthday.

If there’s a life story that needs to be told, Alf Spiteri needs to think about who is playing him in the movie.

It’s a story of persistence, patience and enduring love for the dog. A story that embodies the spirit of the greyhound trainer.

It spans 62 years of training dogs from 80 years of life, without any discernible sign of signs of stopping.

In Alf’s own words, “I’ll never get rid of the dogs until they take me away!”

Alfred Spiteri arrived in Australia from his native Malta in 1957, at the ripe old age of 16, and it didn’t take long for him to pursue racing, a sport instilled by his father in Malta.

“My father, who died when I was 11, used to take me to the horse racing in Malta, but horses were too expensive.’

With £200 borrowed from his mother, Alf bought his first dogs in Sydney in 1958 and by the early sixties found some success with Wyalong Guy.

“A few other trainers had him and couldn’t do anything with him. We didn’t even walk him, and he won his first five races! He was favourite for the 1963 Silver Chief, but unfortunately he broke a toe in the semi.”

1971, and Alf is newly married and renting a farm in Yuroke. The bloke living across the road is none other than legendary muscle man, pioneer and GRV Hall-of-Famer George Schofield.

“We stayed five years there. George had a straight track and taught me about the muscles in the dogs. We were very good friends.”

There was also time for business. Alf ran an electrical and furniture store in Altona North for 30 years. His son, Stephen, recalls they had about eight dogs at the time and Alf used to close the shop early when he had to make a race meeting.

“One of the convenient aspects of having your own business,” Stephen recalls.

“It was a big family effort. I was also involved before my marriage and even remember studying for year 12 exams at the racetrack.”

Stephen also thinks there’s something about the number of trainers with a Maltese background, but Alf can’t pinpoint why.

“Life is too precious, too short. Every minute is a joy for us.”

There have been many greyhounds, but a few stand out for Alf.

“Wyalong Guy, of course and Regal Peak. Emiluke Express won about 25 races. We had another Wyalong Guy in 1989-1990. Now we have only two dogs (Toyman Tim and Mane Toy).”

“We had a double with them just a few weeks back at Bendigo.”

“I’m finding bit hard to get around at the moment, but, thanks to my wife, she drives me around.”

Alf, who lives in St. Albans in Melbourne’s west, dedicates his days to his dogs.

“We start exercising and emptying them at eight o’clock every morning, then I go out again at three, they have food and so on, and we’re out at night, emptying them and rugging them up.”

“I love going to the track, I meet many friends, have a discussion and enjoy it.”

“The dogs are fully part of my life. I will regret the day I can’t go out of the house. They are beautiful.”

“Life is too precious, too short. Every minute is a joy for us.”

Alf never did repay his mother the £200 for those first dogs.

“I never paid her back, so I hope she doesn’t remember when I get to heaven!” 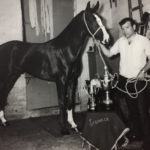 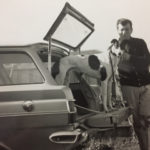 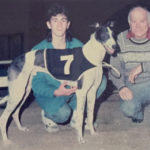