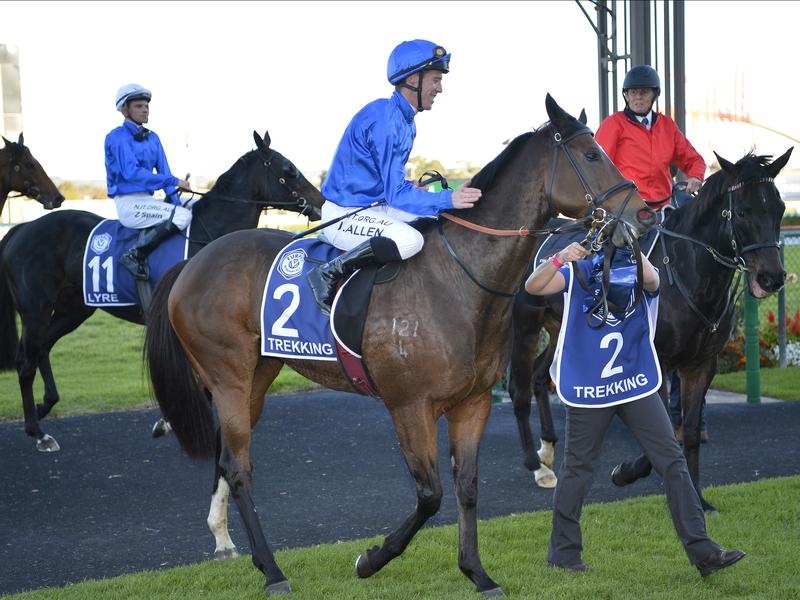 Goodwood winner Trekking has firmed in betting to claim the Stradbroke Handicap for a second time.

Goodwood winner Trekking has been the big market mover after being heavily backed to land another Group One race in the Stradbroke Handicap.

Trekking will be aiming to be the first horse since Black Piranha in 2009-10 and the eighth overall to win back-to-back Stradbrokes.

He will also be aiming to give Godolphin its third Stradbroke in four tries after it also took the race with Impending in 2017.

Trekking was quoted at $15 before taking South Australia’s premier Group One sprint, The Goodwood, on Saturday.

He is now as short as $6 and a clear favourite in most bookmakers’ markets for the biggest race of the Queensland winter carnival.

Trekking is expected to head to Queensland next week to prepare for the Stradbroke at Eagle Farm on June 6.

Adrian Bott and Gai Waterhouse’s Dawn Passage has joined Brisbane galloper Vega One on the second line of Stradbroke betting at $8 although he is as short as $7 in some markets.

Waterhouse has never won the Stradbroke with her best performances thirds with Pharaoh in 1993, Kingsgate in 2002 and Shameka in 2005.

A decision is likely to be made this week on whether Dawn Passage will run in the Group Three Fred Best Classic on May 30 on the way to the Stradbroke.

Santa Ana Lane, who completed the Goodwood-Stradbroke double in 2018, is at $25 after being unplaced in the Adelaide race on Saturday.

Wisdom Of Water was the big mover in the Group One JJ Atkins after his win in the Ken Russell Memorial Classic at the Gold Coast on Saturday.

His price was halved to $4 in most markets although a clearer picture of Atkins betting is expected after Saturday’s Champagne Classic at Eagle Farm.

The current equal second favourites for the JJ Atkins in Isotope and Rothfire are booked to run in the Champagne.