Tornado Tears will return to centre stage at Cannington on Saturday night as odds-on favourite in the opening heat of the Group 3 Miata (715m), named in honour of another champion stayer of the last decade.

Tornado Tears is the $1.50 favourite with TAB from box five in the first of two heats of the Miata, with one of his main dangers former Group 1-winning kennelmate Barcali at $4.40.

Champion trainer Robert Britton has won the past two editions of the Group 1 Bold Trease, held on Melbourne Cup night at Sandown Park, including Barcali who is now in the care of leading WA mentor Chris Halse.

After silencing his few critics when winning the Bold Trease on November 29, Tornado Tears has been beaten favourite at his next three starts; including unplaced efforts in heats of the Sale Cup and Albion Park Gold Cup.

Britton said it was a lack of options closer to home that led to his decision to cross the continent for the Miata, where the $25,000 winner’s purse looks to be at Tornado Tears’ mercy.

“It was the only race available,” Britton said.

“He would have had to do a satisfactory trial at Wentworth Park to have gone in the Summer Distance Plate series.

“He’s been to Cannington before so we decided to head over there. I took him over last Sunday and I wanted to trial him but they’d harrowed the track and I didn’t want to put an older dog around a track like that.

“His preparation hasn’t been as good as normal so he’s a little bit underdone. He’s going in awfully fresh but at the same time I think he’s very well.”

Tornado Tears broke the Cannington 715m record in a heat of the Group 1 Galaxy last March, stopping the clock at 41.25s, before finishing runner-up in the final.

The son of the great Fernando Bale also ran second in last year’s Group 1 National Distance Championship at Cannington behind local Reidy’s Runner, which is $1.90 favourite for heat two of the Miata.

“The ability is still there but he’s not as consistent as he used to be,” Britton said.

“If he puts his best foot forward it looks a good race for him.”

On Friday night at Wentworth Park in Sydney, Britton will be striving to add yet another feature distance trophy to his grand collection with Blazing Cartier to exit box one in the Group 2 Summer Distance Plate Final (720m).

Blazing Cartier, which started her career in NSW, made a triumphant return to her home state when winning her heat in 42.25s, with TAB marking her on the second line of betting at $4.60; however Britton says the inside draw is a worry.

“With most dogs you’d want box one but I’m not really keen on it because she uses plenty of the track,” said Britton.

“She’ll need a bit of luck because she’ll be wanting to get to the centre.

“But she’s going okay and if things go her way I think she’ll run pretty close to the winner.” 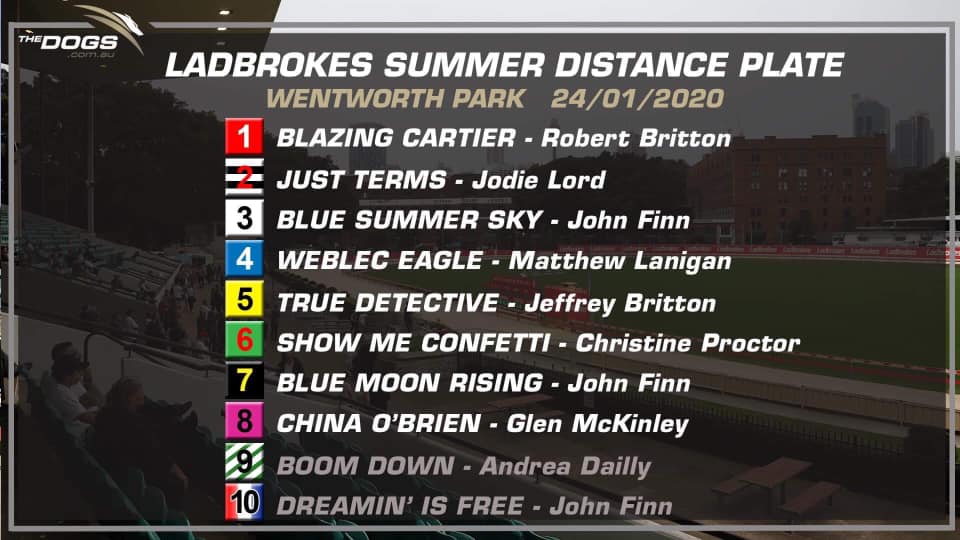