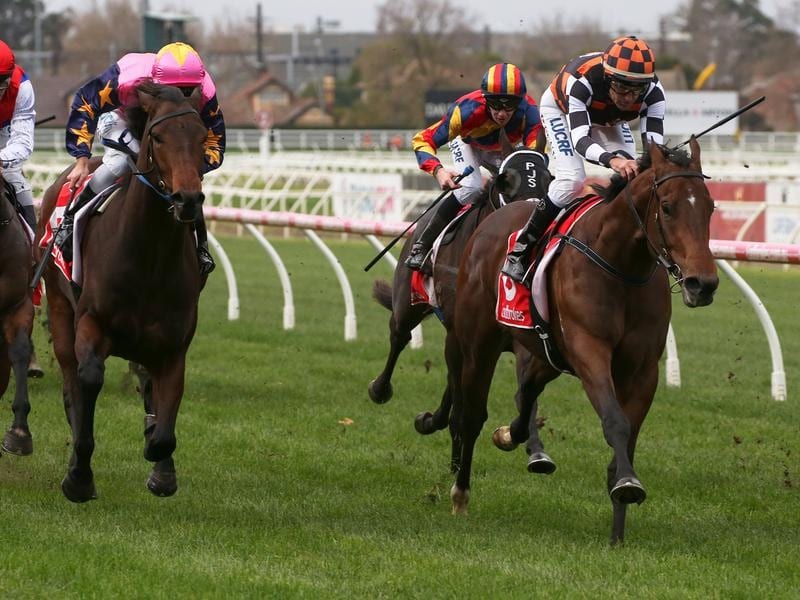 The Astrologist (r) makes his return to racing at Sandown after almost a year off the scene.

Off the scene since finishing second to the talented Rubisaki at Flemington last season, three-year-old The Astrologist is poised to make his return to competition at Sandown.

The Astrologist did most of his build-up from Tony and Calvin McEvoy’s South Australian base before being sent to their Flemington stable to be prepared for Saturday’s Salute Frontline Workers Handicap (1200m).

“He has trialled up twice in Adelaide nicely and it looks like he’s ready for a return,” Tony McEvoy said.

Early in his two-year-old season McEvoy took The Astrologist to Queensland with a view to the Magic Millions Classic in January last year but those plans did not eventuate.

After returning to Victoria he won twice, at Cranbourne and Caulfield, before his second to Rubisaki over 1400m at Flemington last June at his most recent start.

Rubisaki has gone on to win six of her next seven starts.

McEvoy said The Astrologist had had a couple of minor setbacks since he last raced but the trainer is happy with the gelding although he might be vulnerable first-up on a heavy track after a lengthy lay-off.

“He had a pulled muscle and he’s had a sore foot, so just a combination of things,” McEvoy said.

“But it looks to all be behind him now which is good.

“He is a talented horse, there’s no doubt about that.

“I took him to Queensland for the Magic Millions, that’s what he was showing to me, and he couldn’t put it together up there.

“But he’s always had ability.”

The Hawkes Racing-trained Masked Crusader was the $2.60 favourite on Thursday in a field which includes debut winner Lombardo and the in-form Ancestry who has won his past three starts.

Stakes-winning filly She Shao Fly is first-up since spring in the Ladbrokes Back Yourself Handicap (1200m) and McEvoy said her jump-outs at Flemington had been solid.