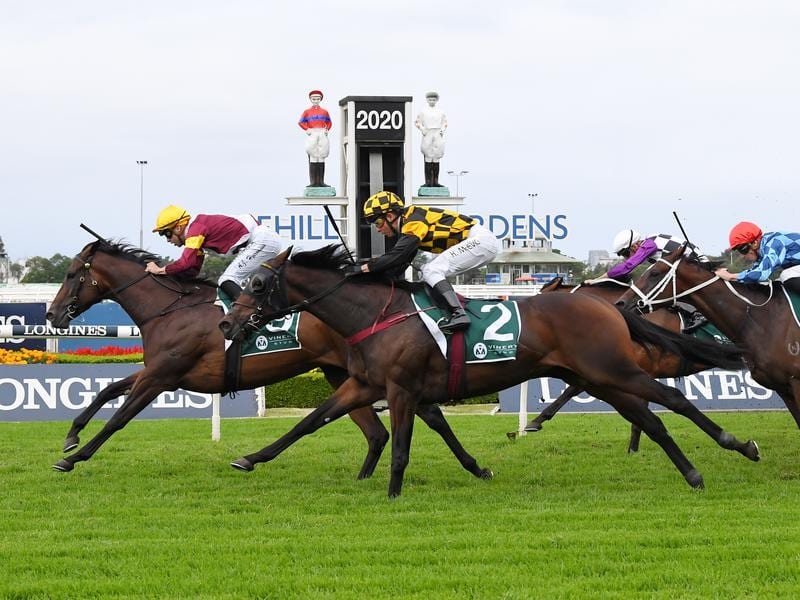 Star NZ filly Probabeel (gold/black) is likely to press on to the Australian Oaks.

Under normal circumstances, Probabeel would be on her way home to New Zealand after a profitable Sydney campaign.

The filly has had three starts for a Group One win in the Surround Stakes and seconds in the Group Two Phar Lap and Group One Vinery.

With uncertainty over how long racing in Australia can continue despite stringent biosecurity measures to deal with the coronavirus pandemic, trainer Jamie Richards is likely to give Probabeel her chance in the Australian Oaks (2400m) on April 11.

Her second to Shout The Bar in Saturday’s Vinery was her first attempt at 2000m and she pleased Richards with the performance on a soft track which is not her preferred surface.

“She was very brave on Saturday and went a terrific race on a track that was a little too wet for her liking,” Richards told NZ Racing Desk.

“I thought Kerrin McEvoy rode her a treat and had her in the right places at the right time but with that slower tempo early in the race she just couldn’t quite get to the winner who had had it pretty soft in front.

“She has been thriving during her time in Sydney and has had no trouble maintaining her weight and condition so the racing isn’t taking that much out of her.

“We had initially thought that Saturday would be her last run and we would bring her home and put her in the paddock as we look to the spring but the way things are at the moment, we have had to have a rethink on that front.”

Richards’ father Paul is looking after Probabeel in Sydney along with stablemates Melody Belle and Te Akau Shark while his son is in lockdown in NZ.

“I’ll speak with Dad about how she has come through the race before we make a decision on our next move,” Richards said.

“The early reports are she has pulled up well and if she comes through this one like she has previously then we will be heading to the Oaks.

“We have Melody Belle ready to go in the Doncaster at Randwick this weekend and she has done really well since moving to Sydney from Melbourne.

“I’m looking forward to getting her on that Randwick track as I think it suits her a little better and as we are based there she has gotten into a nice rhythm which won’t be too different to what she will encounter on race day.”